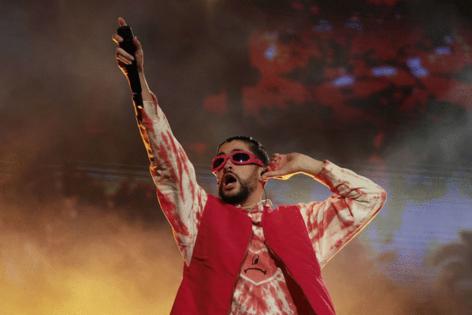 Happy Spotify Wrapped day to all who celebrate — especially Bad Bunny, the most-streamed artist in the world for three years in a row.

The streaming platform revealed Wednesday that the reggaeton sensation is the first musician to pull off a global Spotify hat trick. Rounding out the global top five artists this year were Taylor Swift, Drake, the Weeknd and BTS. In the United States, Bad Bunny was the third most-streamed artist, behind No. 1 Drake and No. 2 Swift.

The music streamer unveiled the most-streamed artists, songs, albums and podcasts of 2022 as part of its annual Spotify Wrapped campaign, in which the company rolls out its end-of-year streaming stats for total and individual listeners. Bad Bunny also topped the global Spotify album chart with his smash-hit record "Un Verano Sin Ti." But Harry Styles had him beat for the most-streamed song: "As It Was."

In addition to "Un Verano Sin Ti," the global top albums included "Harry's House" by Styles, "Sour" by Olivia Rodrigo, "=" by Ed Sheeran and "Planet Her" by Doja Cat. Rounding out the global top five songs were "Heat Waves" by Glass Animals, "Stay (with Justin Bieber)" by the Kid Laroi, "Me Porto Bonito" by Bad Bunny featuring Chencho Corleone and "Tití Me Preguntó" by Bad Bunny.

The global top five podcasts of 2022 were "The Joe Rogan Experience," "Call Her Daddy," "Anything Goes With Emma Chamberlain," "Case 63 (All Languages)" and "Crime Junkie." And, of course, all over social media, Spotify listeners delighted once again in sharing their personal top artists, songs and albums of the year.

Spotify's end-of-year roundup comes a day after fellow streamer Apple Music shared its music stats for 2022. As part of this year's Replay campaign (Apple's version of Spotify Wrapped), the audio platform announced that "Stay" by Bieber and the Kid Laroi was its global top song of 2022, followed by "As It Was" by Styles, "Wait For U (featuring Drake & Tems)" by Future, "Super Gremlin" by Kodak Black and "Easy on Me" by Adele.

"I'm grateful for everything I've accomplished and everything I've experienced," the hitmaker told Apple Music at the time. "The Latin music movement has grown so much. I would never take full credit or say, 'It's because of me.' No, it's every one of us. A whole generation. Our energy and presence is always felt."