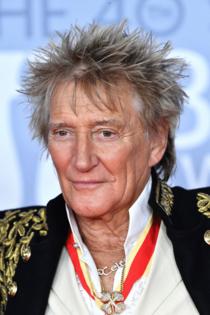 Rod Stewart is mourning the loss of another brother in the span of two months.

The British pop rocker shared Wednesday on Instagram that his brother Bob died Tuesday, just a few months after his brother Don died.

"It's with great sadness that I announce the loss of my brother Bob last night, who joins my brother Don on the great football pitch in the sky," the 77-year-old wrote, sharing an image of a candle flame and the words "Rest in Peace."

"I've lost two of my best mates in the space of two months. RIP Don and Bob 'irreplaceable buddies,'" he added.

The "Maggie May" and "Da Ya Think I'm Sexy?" singer is the youngest of his late parents' five children. He also has two surviving sisters, Peggy and Mary.

Don Stewart died in September at age 94, just two days before Britain's Queen Elizabeth II died, the singer said at the time, adding that it had been "a devastating 48 hours" for him.

The musician, who attempted to mount an early career in soccer, has spoken highly of his siblings and said that they each had a hand in raising him.

"'I've got to tell you, these guys were instrumental in supporting me, helping me get into music and just being there for me," Stewart said in 2019 at Mary's 90th birthday party, according to the Sun.

"Whether it was football or washing my dirty underpants, I can't speak highly enough about these guys," he added. "These guys have just been effing brilliant throughout my life. We've had our arguments haven't we, Don? The odd punch-up now and again but I love you, and I love you, Mary."

That same year, the Grammy Award winner — a reformed bad-boy rocker who has recast himself as a romantic crooner — revealed his own three-year private battle with prostate cancer.

Record producer David Foster, actor Sharon Stone and commentator Piers Morgan were among the many who shared their condolences in the comments section of Stewart's Wednesday Instagram post.

"I'm terribly sorry for your loss my friend," added Stone.

"How sad… deepest condolences to you all. RIP Bob," commented Morgan.