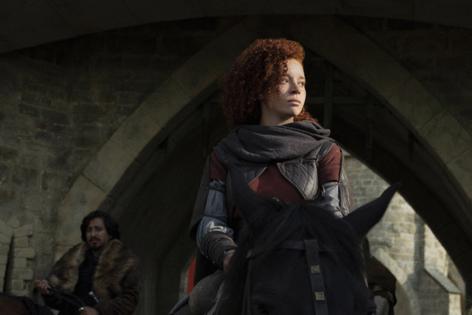 During a recent viewing of "Willow" on Disney+, the, well, 1988-ness of the fantasy adventure just jumped off the screen. It still has plenty to offer — including the bond formed by its unlikely namesake hero, portrayed by Warwick Davis, and his companion-in-quest Madmartigan, Val Kilmer's confident but disgraced knight character — but its effects and pacing haven't aged well.

The good news is the new sequel series of the same name from Disney subsidiary Lucasfilm — debuting with two episodes now available on the Disney streaming service — is very 2022 in the best ways. "Willow" is a show chock full of solid modern special effects, pulsates with life and, most importantly, is populated by lots of appealing characters.

The best part is you don't have to remember — or even have seen, really — the film, directed by Ron Howard from a story conjured by the father of "Star Wars," George Lucas.

Showrunner Jonathan Kasdan, who is the son of director Lawrence Kasdan and brother of director Jake Kasdan, ensures all viewers get a handle on what came before in the land of Andowyne via opening narration from Queen Sorsha (a returning and enjoyable Joanne Whaley). She tells of the journey to protect infant empress Elora Danan from evil Queen Bavmorda by the not-so-tall but very brave farmer and aspiring sorcerer Willow Ufgood and the man she calls "Impossibly conceited," a thief and liar.

"Madmartigan was the man I'd marry," she then admits. "What can I say? I was young."

You'll learn more about this over the first three installments of "Willow" Disney made available for review, but Madmartigan is not around these days. It is a loss felt by the couple's children, handsome and confident prince and ladies' man Airk (Dempsey Bry, "The Silence") and his twin sister, Kit (Ruby Cruz, "Mare of Easttown").

Kit isn't exactly thrilled at the prospect of the royal life intended for her by her mother, one that would involve marriage to Graydon (Tony Revolori, "Spider-Man: No Way Home"), a smart but socially awkward prince from another kingdom. Kit would prefer to spend time with her best friend, Jade (Erin Kellyman,"The Falcon and the Winter Soldier"), an accomplished swordswoman attempting to pass on some of her skills to Kit.

And what of the now-grown Elora, who, it was believed, one day would be able to wield powerful magic? For her own protection, Sorsha has given her a new identity, and not even the young woman herself knows who she truly is. (If you suspect she — and, by extension, we — will learn that information sooner than later, you'd be correct.)

After dark forces descend upon the Kingdom of Tir Asleen and kidnap Airk, an oddly composed fellowship is thrown together (sound familiar?) to endeavor to return him to safety. It includes Kit, Jade and Graydon, as well as Boorman (Amar Chadha-Patel, "The Wheel of Time"), a roguish warrior who shares a history with Madmartigan, and Dove (Ellie Bamber, "Nocturnal Animals"), a kitchen maid seemingly with no real skills beyond baking who is in love with Airk. Her presence is a constant irritation to Kit, but Dove refuses to leave, believing she will somehow be of some use.

The group's first stop is to see Willow, who offers little evidence he has grown into the powerful sorcerer he claims but is willing to join the band.