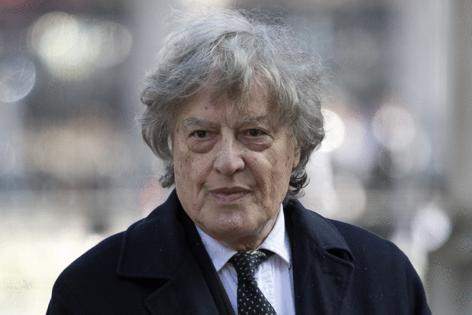 "Leopoldstadt," Tom Stoppard's stunning new play on Broadway about a highly cultivated extended family in Vienna that was decimated in the Holocaust, isn't autobiographical. But the work springs from the Czech-born English playwright's long-deferred examination of his Jewish roots.

In 1999, Stoppard published "On Turning Out to Be Jewish" in the inaugural issue of Tina Brown's Talk magazine. The death of his mother in 1996 prompted him to search deeper into his heritage. He knew bits and pieces about his background but not the extent of the tragedy that befell his relations after Hitler rampaged through Europe.

In his late works, Stoppard has been more willing to confront his personal history. But his method is to imagine alternative versions, as in his play "Rock 'n' Roll," which considers the life he might have led had he gone back to Czechoslovakia instead of moving permanently to England after his father died during the war and his mother married a British army major.

"Leopoldstadt," which is at Broadway's Longacre Theatre in a production directed by Patrick Marber, unfolds as a series of oil paintings magicked into life. The play, which features a cast of 38 actors, moves from turn-of-the-century Vienna, where Freud, Mahler and Schnitzler are the talk of the town, to 1924, when the scars of World War I are clearly visible.

Performed without intermission, the action ominously leaps to 1938, as the Nazis are ransacking the homes of Jewish citizens. The play concludes in 1955, when three family survivors reunite to piece together the fates of their murdered relatives.

Author of such modern classics as "Rosencrantz and Guildenstern Are Dead," "The Real Thing" and "Arcadia," Stoppard is revered for his clever wordplay, inventive wit and breathtaking comic adventurousness. A quick study able to assimilate libraries of material on philosophy, science, history and mathematics, he has an uncanny knack for making the esoteric entertaining. The Oscar-winning screenplay he co-wrote for "Shakespeare in Love" translates to the screen this gift for turning erudition into high jinks.

"Leopoldstadt" is a play that only Tom Stoppard could have written. It's not just that the work mirrors aspects of his personal history. It's also the virtuosic way that he conjures the shifting cultural zeitgeist of Vienna in the first half of the 20th century through stylized conversation alone.

Carey Perloff, the former artistic director of San Francisco's American Conservatory Theater who has directed 11 productions of Stoppard plays, including several West Coast premieres, has written an invaluable book, "Pinter and Stoppard: A Director's View" (Bloomsbury Methuen), which considers the Jewish identities of these English playwrights. Infusing her personal knowledge of the artists with her practical experience of staging their work, Perloff sheds light on what makes "Leopoldstadt" distinctive yet wholly integrated into Stoppard's oeuvre.

Q: In your book you argue that though "Stoppard often says that he has no idea what it means to 'be' Jewish since he does not practice the religion and does not feel part of any coherent group, there is something in his delight in pedagogy, dialectic, argument, and finding the perfect word that connects him clearly to a long line of Jewish thought and intellectual behavior." You quote a character in "Leopoldstadt" who proclaims, "We literally worship culture" — a sentiment clearly shared by his author. How else do you see the complicated story of Stoppard's identity playing out in his body of work?

A: The more I've dug into Stoppard's biography, the clearer it has become that, in spite of appearing to be a quintessential Englishman, he's always been an outsider. (He once said he occasionally feels like he's in England "on a press pass.") So many of his plays feature doubles or characters with divided selves (Housman/AEH in "The Invention of Love," the two Hapgoods in "Hapgood," etc.), which harkens back to Stoppard's own fascinatingly bifurcated identity. His work is about the longing to know coupled with the impossibility of ever really knowing, again echoing the story of his own life and his own hidden Jewish past. Knowledge is everything to Stoppard. I think that's why he and I have always gotten along so well — we're both happiest when we're learning something new, particularly something obscure and irrelevant but thrilling like ancient Greek verb forms or chaos theory. He also writes endlessly about memory and loss — how the past disappears, how culture must be fought for and held on to in the wake of relentless philistinism and misunderstanding — somehow, the burning of the books is never that far away, even in plays like "Arcadia."