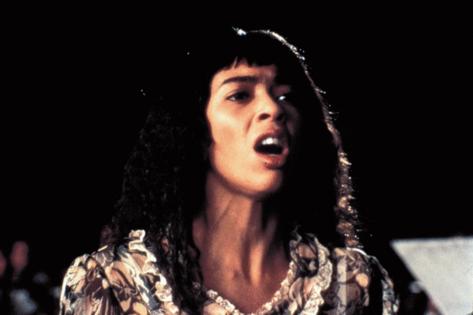 I'm far from a vinyl expert, but I do have a collection that's mostly for nostalgia.

One album that's far more is the soundtrack to the movie "Fame," a high school graduation gift from my best friend, Kyle.

We were theater kids in school, performing in plays all around Detroit, and I was a classically trained dancer as well. If it weren't for the Detroit Windsor Dance Academy, I probably would be in jail or dead. Sometimes performing was the only thing that stopped me from looking for trouble. The scars on my face and body — the ones only I know are there — remind me of the times I found the trouble I was looking for.

That's not me trying to look tough. That's me telling you how Irene Cara saved my life.

For many of you, I'm sure, the news of her passing late last week brought back memories of "Fame" and "Flashdance," the two films that led her down red carpets at the Oscars and the Grammys. Maybe you streamed some songs from those soundtracks for a few fond memories, then went on with your day. I get it.

However, a lot of former theater kids like me remember Cara as much more than just an "early '80s pop star" whose star had faded. I bristle at descriptions that try to paint her as some sort of has-been, as if her relevance as an artist had not transcended music charts and the box office.

Coco Hernandez was more than just a role Cara brought to life in the film "Fame." Coco was an idea. She was a spark that lit fires that have yet to burn out. The resolve and urgency of Cara's voice on the title track made her a Pied Piper of sorts. She inspired many to dream like they hadn't before, to see beyond current circumstances and shortcomings, to believe they could catch the moon with just their hand.

Because of "Fame," cold gave way to warmth, darkness retreated from light, and my ambivalence about my own existence crumbled in the face of newfound passion. Naturally, I found a connection to the character Leroy and the late actor Gene Anthony Ray. But it was Coco who made the theater kid in me believe.

Although the song "Flashdance" came years later, it was easy to hear it as a continuation of Coco's rallying cry. For creative kids who struggled to fit in, Cara's songs aren't dance anthems from an era we've left behind. They are like Broadway showstoppers that never die, like "And I Am Telling You I'm Not Going" from "Dreamgirls" or "Seasons of Love" from "Rent."

The three numbers Cara is best known for — "Flashdance," "Fame" and "Out Here on My Own" — gave us drama, gave us hope and, most important, gave us the kind of vocals that can turn an unknown into a Broadway legend. The only difference was she made her mark on the silver screen.

Perhaps Cara's cultural impact would be easier to see had a lawsuit over royalties not hurt her career. Or maybe if her subsequent work came closer to replicating her earlier commercial success. Who knows. There are all sorts of reasons artist longevity varies. Just as there are various ways to measure the longevity of an artist. Did "The Catcher in the Rye" make J.D. Salinger a one-hit wonder or one of the most influential authors of the past 100 years? Was Cara a flash in the pan or the embodiment of one of the most iconic lines in performing arts history? "You've got big dreams. You want fame. Well, fame costs. And right here is where you start paying: in sweat."

Cara's voice dared us to live that line. And for a closeted kid surrounded by the violence and poverty of inner-city America during the crack epidemic, that dare saved me. By the time I got to high school, if I wasn't in a rehearsal, I was onstage. On the way to theater auditions in college, I had Cara's music in the rotation on my Walkman. Her music has been a constant in my life, and not because of nostalgia.

Believe it or not, I played "Flashdance" the day I interviewed for the Los Angeles Times, because even at my age, fear can chase dreams into hiding. In fact, most of the songs I listen to on days like that are big, show-stopping numbers like "Fame." They reach something I've learned to value over the years — the theater kid that will always be inside.

LZ Granderson is an op-ed columnist for the Los Angeles Times.