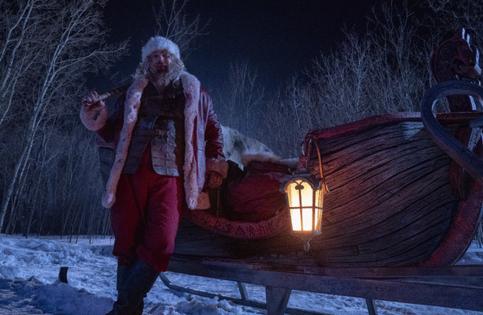 Ultraviolence at the holidays takes on many forms. I’ve seen children tear open presents in ways that would garner a hard-R rating for graphic, disturbing intensity. At the movies, I’ve seen what some of you have seen — “Dead Snow,” for example. It’s technically an Easter movie, but all that snow makes it feel Christmassy.

Norwegian director Tommy Wirkola’s 2009 festivus of gore imagines the story of medical students on a skiing holiday sharing the slopes with a horde of Nazi zombies. Lively, insanely gory stuff, it’s very much “in the wild-eyed spirit of Peter Jackson’s ‘Dead Alive’ and Sam Raimi’s ‘Evil Dead 2,’” per the Tribune review. Wirkola later made a “Dead Snow” sequel, along with his early English-language features, among them “Hansel & Gretel: Witch Hunters.” The man likes his ultraviolence in the service of familiar, adorable icons.

Now we have Wirkola’s “Violent Night,” starring David Harbour from “Stranger Things” as a puking, sledgehammer-swinging Santa on a righteous killing spree.

Box office predictions are pretty silly these days since so many good movies tank in theaters except for the top guns and black panthers and the occasional Elvis biopic. Branding! People are brand-loyal. “Violent Night” isn’t part of a franchise — yet — but Santa is a primo brand. “Die Hard” meets ”Home Alone” meets ”Bad Santa”-but-badder. I don’t see how it can lose, especially given its low-ish production budget coupled with a high-ish Universal Pictures marketing budget. It’s not very good. But Harbour’s sodden gravity and sneaky levity holds it together, as the mood careens from aw-shucks sentiment to massive, bloody spasms of death by Christmas tree ornament or snowblower or good old-fashioned automatic gunfire, which I find less diverting by the second.

The setup of “Violent Night” is simple, though the screenplay, by “Sonic the Hedgehog” writers Patrick Casey and Josh Miller, makes it needlessly sludgy and given to indulgent monologues about everyone’s torturous relationship to Christmas. The movie begins with a prologue set in an English pub, where Santa’s getting drunk and bemoaning the state of things. He has had it with his job, and can barely stomach another year of delivering video games and money to everyone on the “nice” list.

His belief in himself, and in Christmas, is restored through bloodletting. (He’s a former Viking warrior, and not a nice one.) At the remote, lavish Lightstone family mansion (Beverly D’Angelo plays the greedy matriarch), a dysfunctional family gathering is interrupted by sadistic mercenaries looking for hidden millions. The bad people are led by John Leguizamo, playing it straight, which isn’t much fun in the context of a vicious black comedy.

The hostage situation leads to a huge body count even before Santa shows up to save 7-year-old Trudy (Leah Brady), reunite her estranged parents (Alex Hassell and Alexis Louder) and revive his mojo. Some of the violence is amusingly excessive: Stabbing one assailant in the eye with a pointy Christmas tree star, Santa then takes the trouble to plug in the attached electrical cord which causes the man’s head to burst into flames.

How does this jibe with the half-sincere, half-mocking sentimental bits between Santa and Trudy? Not well, I thought. But results will vary.

Long ago, in his “Dead Snow” director’s statement, Wirkola expressed a desire for a jolly sort of sadism, an antidote for screen brutality designed to “make the audience feel sick, depraved and depressed.” Something has slipped since 2009. Maybe it’s me; maybe it’s the intervening 13 years of recreational slaughter on our screens. Many of the enthusiastic, even giddy early reviews disagree, but I found “Violent Night” to be a joyless slay ride, not to mention verbally witless. There’s not much kick in seeing an R-rated version of “Home Alone,” and even that owed its home-invasion nastiness to Sam Peckinpah’s “Straw Dogs.”

And here we are, on the other side, watching the facetious bookend to “Straw Dogs,” with lil’ Truly relentlessly name-checking “Home Alone” as she booby-traps the mansion as Santa’s helper. I’m sure the filmmakers and Universal brass know full well their holiday offering movie will be watched, endlessly, by preteens once it’s streaming. They are, most likely, counting on it.

MPAA rating: R (for strong bloody violence, language throughout and some sexual references)