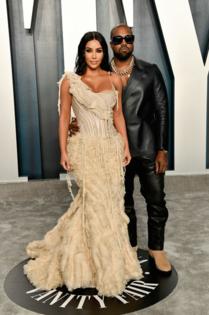 LOS ANGELES — Kim Kardashian and Ye, who used to go by Kanye West, filed an agreement Tuesday covering who gets what in their divorce — including custody of the kids.

As a part of their divorce settlement, the rapper-designer must pay $200,000 a month to the reality star and beauty mogul for child support, according to a dissolution document filed Tuesday with the Los Angeles County Superior Court.

The couple married in May 2014 and separated at the end of 2020. Kardashian filed for divorce in February 2021. And while the divorce has played out in court, a judge in March granted Kardashian's request to be considered legally single and to drop "West" from her name. Ye had opposed her requests leading up to the decision.

Since their separation, the two have butted heads over how to co-parent their children. Earlier this year, Ye made his grievances public in a series of social media posts in which he verbally attacked Kardashian, her family and Pete Davidson, who was her boyfriend at the time. He has since apologized for the posts.

In a "Good Morning America" interview with ABC News' Linsey Davis, Ye said he has "had to fight for" more authority regarding their children's upbringing.

The former spouses have agreed to joint custody of North, 9; Saint, who turns 7 next week; Chicago, 4; and Psalm, 3.

Both must give consent for things such as where the children go to school, nonemergency medical appointments, extracurricular or religious activities, where the children live, and when they will obtain driver licenses, court documents said. The former spouses may celebrate special events such as birthdays together with the children.

The two also agreed to each pay half of their children's expenses, medical coverage, tuition and security, according to court documents.

As the children get older, they will also have a say over how involved they want each parent to be in their lives, documents said.

During the months after their separation, Ye was living solo at the couple's 1,400-acre ranch in Wyoming, while Kardashian has stayed with the kids primarily in their luxe-but-spartan mansion in Hidden Hills. Ye would come home for family visits, and he eventually bought a house nearby.

The divorce papers also offer a look into the former couple's wealth. A prenuptial agreement spelled out who owns what among their various properties, belongings, stocks and bank accounts. Ye and Kardashian own 19 separate properties between them across four different states, including mansions, condominiums, estates, ranches, office space and empty plots of land in expensive Southern California ZIP Codes.

Kardashian will keep her Hidden Hills mansion along with nearby plots of land in residential areas, plus homes in Malibu and Idaho, according to court documents.

Ye keeps his own Hidden Hills mansion located a block from Kardashian's, a beachfront home in Malibu, office space, condos, plots of open wilderness in Calabasas and his massive ranch in Cody, Wyoming.

The pair waived their right to pursue spousal support, according to documents.

Although Ye has dated other women and was engaged to designer Alexis Phifer, his relationship with Kardashian was his sole marriage. The businesswoman was married twice before, first to music producer Damon Thomas and then to former NBA player Kris Humphries. Marriage No. 2 famously ended after only 72 days.