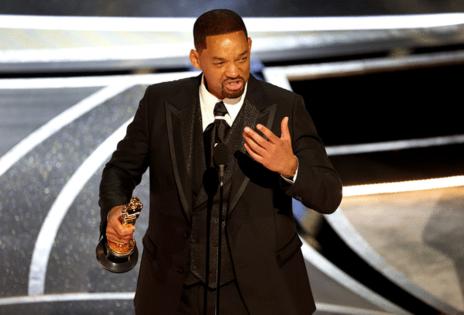 Will Smith knows that his "horrific decision" to slap Chris Rock at the 2022 Academy Awards casts a long shadow on his upcoming projects and appeared on "The Daily Show" on Monday to unpack his latest mea culpa.

While promoting his starring role in Antoine Fuqua's upcoming film "Emancipation," the 54-year-old actor sat down with host Trevor Noah for a 21-minute interview in which he addressed the infamous incident and its still-unfolding aftermath. The Oscar winner got an unprecedented 10-year ban from the Academy Awards.

The "King Richard" star found himself in sympathetic company with the outgoing host — who also alluded to the incident when hosting the Grammy Awards. They dissected what led Smith to storm the stage at the Dolby Theatre to slap Rock after the comedian made a dig about Jada Pinkett Smith's hair loss.

After discussing his upcoming NatGeo show "Pole to Pole," U.S. slavery and the Fuqua film — which he described not as a slave movie but "a freedom movie" — the two got in to the psychology behind Smith's actions on the night of March 27.

"That was a horrific night, as you can imagine. There's many nuances and complexities to it, but at the end of the day, I just, I lost it," Smith said, occasionally tearing up during the interview. "And I guess what I would say, you just never know what somebody is going through.

"You just don't know what's going on with people. I was going through something that night. Not that that justifies my behavior at all," he added.

"We just gotta be nice to each other man, it's hard," he continued.

The "Ali" and "I Am Legend" star, who went on to win the lead actor Oscar that chaotic night and delivered an emotional speech, told Noah that the "most painful" thing was that he "took my hard and made it hard for other people."

"And it's like I understood the idea where they say 'hurt people hurt people,'" Smith said.

Noah cited Smith's 2021 memoir in which he discussed how he grew up afraid of conflict and afraid to fight, and described the Oscars slap as a moment when Smith stood up for the wrong thing at the wrong time.