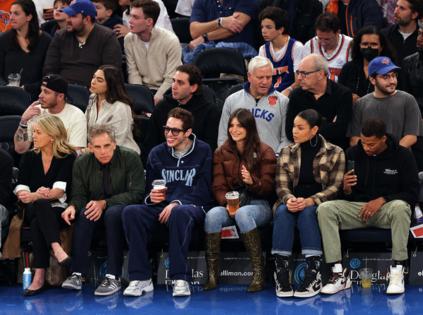 Roses are red, violets are blue ...

Pete Davidson and Emily Ratajkowski were photographed hugging earlier this month, and now they've attended a Knicks game together too.

Does that mean the comedian and the model are officially dating? They have neither confirmed nor denied the romance rumors that have been brewing since paparazzi snapped them embracing in Brooklyn on Nov. 16. However, Davidson and Ratajkowski further stoked the relationship speculation Sunday by sitting courtside together at an NBA game between the Memphis Grizzlies and the New York Knicks at Madison Square Garden.

In one widely circulated photo from the sporting event — shot by Jamie Squire for Getty Images — the "Saturday Night Live" alum and the "Gone Girl" actor can be seen enjoying some beers and smiling in the front row. They are seated among actor Christine Taylor; her husband and fellow actor Ben Stiller; singer Jordin Sparks; and her husband, model Dana Isaiah. A triple date, perhaps?

Reps for Davidson and Ratajkowski did not immediately respond Monday to inquiries from The Times.

Leading up to the Knicks game sighting, Twitter was already having a field day with the sheer possibility of a Pete-EmRata (PeteRata?) fling. Much of the discussion has revolved around Davidson, who is notorious for his star-studded dating history and Casanova reputation. (Even music legend and Twitter maven Dionne Warwick couldn't help but enter the chat by joking that she "will be dating Pete Davidson next.")

On Sunday, the Knicks themselves waded into the conversation by tweeting close-up shots of "Pete & @emrata at The Garden," along with some orange and blue heart emojis. And you can bet the Knicks' social media team knew exactly what they were doing.

The alleged lovebirds have yet to go Instagram official, but multiple people interpreted the Knicks-game appearance as a "hard launch" or solid proof that they are an item.

"respect to pete and emrata for waiting until ja morant was playing in the garden to hard launch their relationship," @mollyhannahm tweeted.

"I'm @ the Knicks game and Pete Davidson & EmRata are here on a courtside date," @aliweissworld tweeted. "They look extremely hot (and healthy. Like literally...dewy) and haven't stopped talking/laughing the whole time and thqh I'm stanning it a LOT harder than I thought I would."

The MSG photos arrived several months after Davidson and his most recent girlfriend, Kim Kardashian, broke things off. Ratajkowski was also freshly single after parting ways with her husband of four years, Sebastian Bear-McClard, amid reports that he cheated on her.