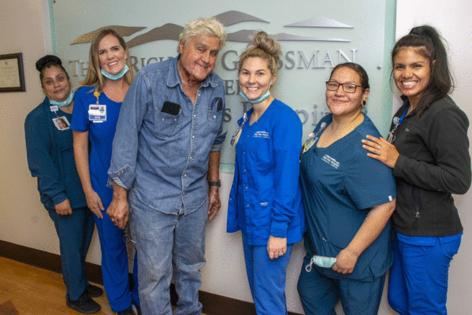 The comedian grazed a police car upon arriving at a California comedy club for his first performance since suffering serious burns this month, according to TMZ.

He downplayed the incident after the show, telling reporters, “I didn’t really hit a cop car,” and responding, “Well, there you go,” after a media member said there was no damage to either vehicle.

Leno’s stand-up set came less than a week after he was released from the Grossman Burn Center in Los Angeles, where he was treated for the deep second-degree and possibly third-degree burns he suffered Nov. 12 when a car he was working on caught fire.

The former “Tonight Show” star underwent at least one surgery at the burn center, where he stayed for more than a week.

“I am pleased with Jay’s progress, and I am optimistic that he will make a full recovery,” Dr. Peter Grossman said in a statement last week.

A native of New Rochelle, New York, Leno is a well-known car collector who has hosted the CNBC series “Jay Leno’s Garage” highlighting vintage and interesting vehicles since 2014.

He told reporters that Sunday’s stand-up show went well, saying, “They were a great crowd.”