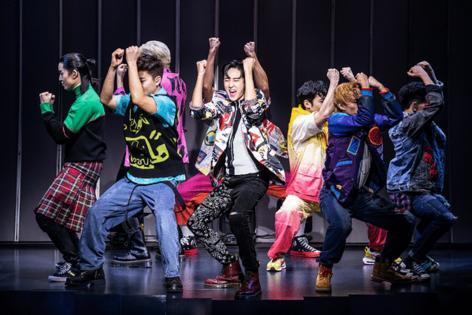 NEW YORK — The pandemic was not kind to “KPOP,” the new Broadway show that aims to do for South Korean popular music much of what “Dreamgirls” did, and did not do, for Motown.

Not only did the off-Broadway hit lose much of the momentum from its 2017 run at Ars Nova in New York, taking some five years to reach a changed Broadway, but lingering health effects resulted in an official opening delayed to Sunday night and a challenging preview period that surely intruded on the ability of a talented cast to relax, go to it and have the kind of confident fun that can ignite an audience ready for a good time.

In essence, “KPOP” is a backstage story that wants both to celebrate the Korean pop music industry, known for its tight harmonies, its blending of disco, techno, house and funk, its incursions into hip hop, and its good-looking young performers, and also critique its rigorous regimentation and stifling authoritarianism in artist training, preparation and repertory.

So the dramatic conflict in Jason Kim’s book suggests itself, really. Many younger Asian American playwrights working in the American theater are probing the same broad theme: how to respect tradition and cultural identity while also breaking free emotionally, creatively and personally. “KPOP” certainly is on fertile ground when it explores to what degree K-pop as a music genre should conform to the demands of a global music marketplace that variously prizes individuality and conformity and, you could well argue, eats tradition for breakfast, spits out money for lunch and breaks artists’ hearts for dinner.

The problem the show has, though, is has to explore all of that in some kind of fresh way (not easy, given the number of artist-centered backstage stories already out there) while still delivering a knockout concert for K-pop fans. And, frankly, it lands somewhere in the uncertain middle, likely satisfying none of these demands.

The other issue faced by the show, which is directed by Teddy Bergman and choreographed by Jennifer Weber, is the high expectations that face all Broadway vocalists, who typically have skills quite different from recording artists in a South Korean industry very driven by video appearances and enhanced studio sessions.

There are some great, super-glam pop singers in “KPOP,” especially among the guys who form the show’s boy band, but once you put a cast in this kind of format, especially in the round as is the case at Broadway’s Circle in the Square, it exposes some of the vocal inexperience of these performers in a Broadway setting. Add in the stresses of the season and “KPOP” felt like it was struggling to fulfill all the complex expectations it was facing, ironically a manifestation of its own internal themes.

The new Broadway version of “KPOP,” very different from its off-Broadway incarnation, borrows some from “MJ the Musical.” The audience is part of the making of a documentary about the forthcoming American tour of several acts on a leading K-pop entertainment company’s obliquely named roster — a large boy band called F8, a five-member girl group known as RTMIS and a famed solo act, MwE, played by the real K-pop star known as Luna. Helen Park and Max Vernon co-wrote the serviceable musical score.

The strongest musical moments come from F8 with standouts like Jiho Kang and Eddy Lee; RTMIS is collectively charming, for sure, but their individual roles are underwritten in my view and the performers were not always on pitch at the performance I saw; Luna, meanwhile, has her moments, but she finds herself overly trapped in the book, rather than allowed to use it as a launchpad.

Frankly, Kim should have given this new book a dry run somewhere; the show is stronger in Act 2, but the first act gets bogged down in backstage cliches and the usual authoritarian shouting from besuited bosses and it takes far too long for the performers to get the chance to pop. The opening few minutes is especially weak.

Once the show finds its legs, a lot of the people in the house had a total blast at my show, giving every ounce of energy back to the cast, but, in the end, the production doesn’t dive enough into the culture conflicts inherent to K-pop, nor does it really introduce this vibrant world for a broader Broadway audience.