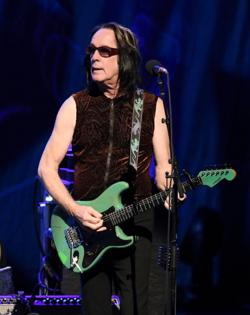 MINNEAPOLIS — It just says "Daryl Hall" on the marquee. There's no "and" or ampersand in the billing. But there should be.

Even though Hall — the tall, blond singer in Hall & Oates — is undertaking a rare concert tour to explore his solo work, he's really a collaborator at heart. That's why he has old pal Todd Rundgren touring with him.

"I love collaboration," said Hall, who comes to the State Theatre in Minneapolis on Tuesday. "I like that feeling when you get into somebody's head and they get into your head and something happens that's bigger. It eggs me on in different directions, and I do like that because I have a lot of musical loves."

Aware of each other since their teenage musician years in suburban Philadelphia, Hall and Rundgren ran in different circles — soul scene and rock clubs, respectively — but didn't meet until both moved to New York City in the mid-1970s.

They connected at a screening of the movie "Fantasia." "That's when I said: 'You want to work together?'" Hall recalled. They came up with the concept for Hall & Oates' third album, the newly rock-oriented "War Babies," produced by Rundgren.

Hall, 76, has enjoyed teaming up with fellow Rock & Roll Hall of Famer Rundgren, 74, a cohort, on and off, for years.

"I like his sensibilities. He's very easy to work with," Hall said. "He thinks the same way musically as I do. He's a maverick, he's eclectic. He's a fantastically talented musician."

Hall is celebrating his new retrospective "Before After," which features 30 selections from his five solo discs as well as performances from his acclaimed web series, "Live From Daryl's House."

"I speak a lot of languages musically," he said recently from his home in Connecticut. "And why not. It's all notes and melodies and grooves."

With his solo projects, Hall wasn't required by a record label to craft songs that had radio or commercial appeal.