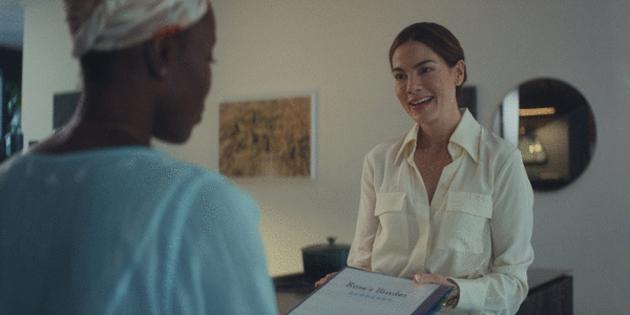 Some movies, mostly to do with how they’re marketed, keep the audience guessing as to what the hell it is, exactly, right up until the moment the lights go down or they click the play button. Horror movies do better business, so the ads tend to play up the horror element in movies that aren’t really horror movies.

Take, for example, “Nanny,” an eerie, assured debut with a terrific central performance from Anna Diop.

“Nanny” is one of those exceptions, written and directed with supple authority by first-time feature writer-director Nikyatu Jusu. Diop plays Aisha, who has emigrated from Senegal to New York City, leaving her young son at home with family until she earns enough money to bring him over.

Aisha’s employer is Amy (Michelle Monaghan), a tense, competitive corporate executive who lives in a terrifyingly immaculate Upper East Side apartment with her restless, secretive husband Adam (Morgan Spector) and their daughter Rose (Rose Decker). The nannying job pays in cash, under the table and off the books. Amy and Adam don’t seem happy, but they do seem like reasonable, enlightened people, though there’s something plainly off with the way Amy notes, in one scene, how the bright red top Aisha’s wearing goes so well “with your skin.”

Amy keeps her daughter on a super-strict eating regimen; references to what everyone’s been through lately with the pandemic are hinted at, slyly, obliquely. More obvious is Amy’s exhausting work life. And her husband’s apparent, stealthy interest in “the help.” And the imminent clash of wills between Amy (who has a bad habit of not paying Aisha on any sort of schedule) and Aisha, who introduces the privileged, sheltered Rose to jollof rice and other West African staples.

Aisha hasn’t seen her little boy in a year, FaceTiming with him just often enough to break her heart. She is haunted, increasingly, by visions of drowning and by spiders, big ones, crawling on the walls of her bedroom. Dreams, mostly. Waking dreams, possibly. Dangerous manifestations, threateningly. Who and what is disturbing Aisha’s already dislocated state of being?

There’s more in “Nanny,” notably a budding romance from Malik, the security guard played warmly and well by Sinqua Walls. Malik takes care of his grandmother (Leslie Uggams), who claims to have psychic powers (her business card reads “intuitive consultant”) and has a hunch about the spirit-world tricksters who may be responsible for Aisha’s visions.

Some of the storytelling elements don’t fully gel, and there’s a recovery period missing after a key reveal near the end, one that would’ve strengthened the finish of a well-packed hour and a half and change. But this is where Diop comes in. The Senegalese American actress, best known as the emerald-eyed Starfire on TV’s “Titans,” carries every scene with aplomb, and she’s rarely off-screen. Diop is a reactive wonder as well as an exceptional scene partner as she strategizes, subtly, how to work with or around or deflect the microaggressions coming from her “new family” and, more happily, her few friends in this strange new land.

Director Jusu revels in the otherworldly imagery, often with Aisha underwater or in domestic surroundings where she’s unsure whether she’s awake or asleep. (The vibrantly expressive cinematographer is Rina Yang.) All this works as a metaphor for the immigrant experience; Aisha is at once drowning in an unfamiliar life, and parched for a taste of home.

MPAA rating: R (for some language and brief sexuality/nudity)

How to watch: Now in theaters; on Prime Video Dec. 16