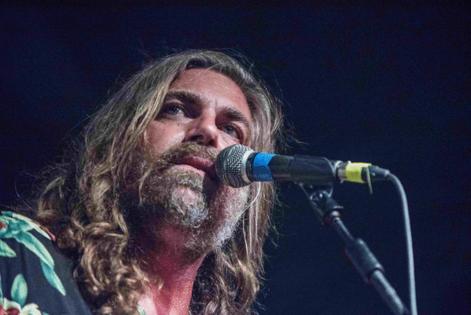 ANAHEIM, Calif. — As the Los Angeles-based singer-songwriter Jake Smith, who goes by the moniker The White Buffalo, began toying with ideas for his eighth studio album, he decided to challenge himself by doing something sonically and lyrically different.

When he Googled his band, he saw that they’d been essentially pigeonholed into the country genre, which he said he could understand, but it didn’t feel entirely accurate.

“That would blow my mind,” he said during a recent phone interview while on the road in support of the new concept album, “Year of the Dark Horse,” which was released Nov. 11.

“I never thought country was my thing,” he explained. “I don’t sing about Solo cups and trucks and chicks with jean shorts … I always just write whatever comes to me and it’s always been sort of a genre-less thing.”

Smith — whose versatile sound includes elements of folk, rock, blues and Americana-roots music — gained popularity when his songs were used on the FX drama “Sons of Anarchy.” During the final season of the show in 2014, his music served as the soundtrack as he provided 11 songs total, with the last song in the series finale, “Come Join The Murder” featuring The Forest Rangers, garnering The White Buffalo his first Emmy Award nomination. His songs have also been used on TV shows like “This Is Us,” “Californication,” “The Punisher” and feature films including “Shelter,” “Safe Haven” and “West of Memphis.”

In an effort to shake the very specific label bestowed upon him, Smith said he decided to put down his acoustic guitar when he began writing songs this time around and picked up a synthesizer to play with during the pandemic lockdowns at home.

“I started writing with different sounds on an instrument that I really didn’t even know what I was doing with it,” he said. “Since I had pretty much always written exclusively on acoustic guitar, it opened me up to different soundscapes and melodies and opened up this whole new world, so that inspired a lot on this new album as well.”

The concept for the album started to take shape as he mapped out the story arc of following an anti-hero through the four seasons and incorporated a love story as well. He had a bunch of musical influences swimming in his head, such as Electric Light Orchestra, Tom Waits and Bruce Springsteen, the latter of which he’ll be opening for on tour in Italy in 2023.

While not entirely a work of fiction, he said there’s more autobiographical lyrical content within the songs than he realized at the time he was writing them. Smith also worked with a new producer, Jay Joyce, who has produced songs and albums for artists like Eric Church, Cage the Elephant, Emmylou Harris, Fidlar and Patty Griffin.

“He’s about the closest thing to a savant or genius I’ve ever worked with,” he said. “He pushed us to extremes and I wanted to just abandon the cages I’ve been trapped in.”