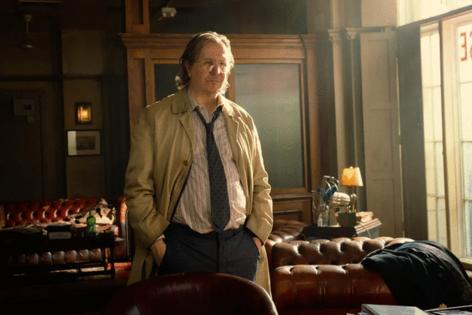 In an upcoming episode of "Slow Horses," an MI5 agent working under Jackson Lamb, Jack Lowden's River Cartwright, brings information to his boss, who's eating lunch by himself at an Asian restaurant.

As Lamb — portrayed by veteran actor Gary Oldman in the British spy drama series, available in the U.S. via Apple TV+ — listens and offers some thoughts, some of the noodles intended for his stomach fall out of his mouth and back into the bowl.

It's pretty much par for the course for Lamb.

"Does he have good table manners?" Oldman reflects during a recent video interview. "I don't know, but he's going to provoke you, isn't he? It's like someone deliberately eating with their mouth open."

Honestly, for those in his charge at the outpost known as Slough House, a place where MI5 banishes its not-so-shiny operatives, that's about as good as it gets.

The constantly drinking, always sloppily attired Lamb doles out insults along with assignments for River, Louisa Guy (Rosalind Eleazar), Min Harper (Dustin Demri-Burns) and Roddy Ho (Christopher Chung), who's as obnoxious as he is.

He's even pretty rough on Catherine Standish (Saskla Reeves), the kind office administrator who is a recovering alcoholic and carries around what feels like a lifetime of emotional pain.

At least Lamb gets as good as he gives from his boss, Deputy Director-General Diana Taverner (Kristen Scott Thomas), who never passes on an opportunity to tell him just how disgusting he is.

"Slow Horses" is an adaptation of the "Slough House" book series by Mick Herron. Even though the six-episode first season, based on Herron's 2010 novel "Slow Horses," debuted earlier this year, we already are getting a second, based on 2015's "Dead Lions." "Slow Horses" returns Friday with its first of six weekly installments.

In a conversation about the show, the new season and their characters, Oldman — whose long list of credits includes "The Dark Knight Trilogy," "Tinker Tailor Soldier Spy" and an Academy Award-winning turn as legendary British Prime Minister Winston Churchill in 2017's "Darkest Hour" — is joined by Reeves ("Belgravia," "Roadkills").