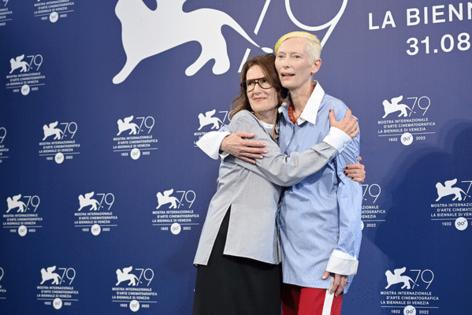 As a child, Tilda Swinton always felt like an outsider, an observer of others, sometimes even in her own family. One day at the British boarding school she loathed, she met another girl, Joanna Hogg, who shared a similar worldview. (Another classmate was Diana Spencer, the future princess.)

“We were two aliens, if you like. It was that wonderful thing of being isolated, but together in that,” Swinton recalls a half-century later, sitting on a couch in Manhattan, New York, with her lifelong friend, discussing their latest collaboration, “The Eternal Daughter,” which arrives in theaters Friday. Hogg wrote and directed the film; Swinton stars.

“There was a feeling of not being in step at the school, so we took refuge in each other,” Hogg adds, prompting Swinton to note that “nothing has changed,” which sparks a burst of laughter from the two women.

Swinton says that as children they weren’t consciously plotting future film careers – “There wasn’t a point where we stopped talking about treehouses and started talking about cinema” – but she argues that it was all happening below the surface.

“We enjoyed the mutual experience of sharing awareness about the energy of groups, the unspoken tendencies of other people,” she says. “We were always feeling between our fingers and our thumbs the metal of the kind of work we’re creating now.”

When Hogg studied photography in their late teens, she used the distinctive Swinton as one of her models (Swinton recently found photos from that period), and when she moved into filmmaking it was “a seamless transition” – they collaborated on two projects, one unfinished and one, “Caprice,” that became Hogg’s graduation project from National Film and Television School in 1986.

By that point, Swinton was a member of the Royal Shakespeare Company. Her first feature film, “Caravaggio,” came out the following year, directed by Derek Jarman, who was a mentor to both women.

At that point, their careers diverged: Hogg spent most of the next two decades directing television in Britain, enjoying success but chafing at the restrictions. Swinton first made her mark in 1992’s “Orlando,” about an androgynous nobleman in the Elizabethan era, but was mostly below the radar as well until the 21st century.

Finally, it seemed the world caught up to what Hogg and Swinton had to offer: starting in 2007, Hogg directed three critically acclaimed features in six years (“Unrelated,” “Archipelago,” and “Exhibition”); in 2007, Swinton won an Oscar for her supporting role in “Michael Clayton,” which she followed with distinctive turns in films like “Burn After Reading,” “Snowpiercer” and “The Grand Budapest Hotel” and “We Need to Talk About Kevin.”

In 2019, more than 30 years after their last film collaboration, the two reunited on Hogg’s semi-autobiographical movie “The Souvenir.” Swinton played Rosalind, a stand-in for Hogg’s mother and Hogg cast Swinton’s daughter, Honor Swinton Byrne to play her own alter ego, Julie. They reunited for a sequel last year.

Got a loose button on a jacket but don't have time to sew it back on just yet? Use a dab of clear nail polish on the threads to hold it in place ... until you can find your sewing kit, that is.

When you get to the top, stay there and make sure other women join you.

If you find black slacks or skirts that you like, buy an extra pair. Black fades quickly, but having an extra will keep your favorite clothes from wearing out too quickly.

Nature gave women too much power; the law gives them too little.

Storing your bras incorrectly may cause the underwires to poke out after just a few wearings. To keep them from getting twisted, store your bras on a hook in your closet, rather than in a dresser drawer.

We need women leaders. But we need them to have a vision for something.