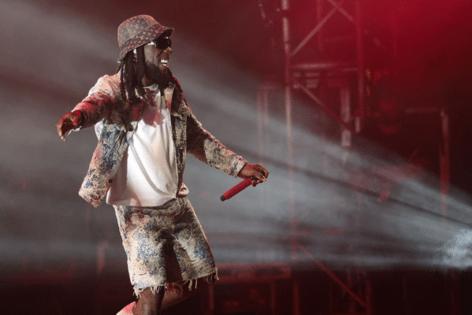 A few years ago, you'd be hard-pressed to hear Afrobeats acts like Tiwa Savage, Davido, Wizkid or Burna Boy on mainstream radio stations in the U.S. Now, those artists are scoring songs on soundtracks for blockbuster films and nabbing Grammy Awards.

But perhaps nothing is more telling of the growing prominence for Afrobeats artists than how they’ve swept the stage, selling out major concert venues. Grammy-winner Wizkid recently headlined a show at New York’s famed Madison Square Garden, following a sold-out concert in April from Burna Boy, a fellow Nigerian artist and Grammy winner. Meanwhile, Fireboy DML this month played London’s OVO Arena Wembley, where he was joined on staged by Ed Sheeran, who regularly ranks among the top artists on Bloomberg’s Pop Star Power Rankings.

For years, there’s been bubbling interest from the U.S. and Europe in Afrobeats, an umbrella term used to describe popular music with roots in West African countries such as Nigeria and Ghana. That enthusiasm exploded to new levels in 2022, underscored by the swell of tour dates that’s generated big revenue. Burna Boy’s April show at Madison Square Garden grossed about $1.6 million in ticket sales, according to Pollstar, which tracks industry data. The appreciation hasn’t been limited to cities like New York. Fireboy toured across the country earlier this year and saw large turnouts in Denver, Dallas, Seattle and Minneapolis.

“I sold out in quite a few places,” Fireboy said in an interview. “Afrobeats has really grown, and touring has been a very useful tool in pushing that and the culture.”

A significant portion of Afrobeats listenership has come from audiences outside of Africa — a 2019 study by YouTube found 70% of views on popular Afrobeats videos on its platform came from the U.S, the U.K. and France. That figure has likely grown, according to Addy Awofisayo, YouTube’s Head of Music, Sub-Saharan Africa. Her role was created at the end of last year “specifically because we wanted to do more on the continent,” she said.

“We saw there was a need to really double down on African music,” Awofisayo said.

U.S. record labels like Warner Music Group have also invested in Afrobeats. In 2019, Warner Music announced a partnership with a leading label in Nigeria, Chocolate City, and that was followed by partnerships with Africori and Ziiki Media. Warner Music then acquired Africori earlier this year.

“We been very strategic about investing in people who have been operating on ground,” said Temi Adeniji, managing director of Warner Music South Africa.

Empire, which started investing in Afrobeats artists nearly seven years ago, now has signed about 20 acts in the genre, including Fireboy, said Ghazi Shami, the company’s chief executive officer. Shami also touts the company’s relationship with one of Nigeria’s top labels, YBNL.

One of the world’s current biggest artists, Bad Bunny, doesn't typically sing in English, and neither do many of the K-pop acts that have attracted international fandom. Sub-Saharan African often perform in a mix of Yoruba, Igbo, pidgin English, Swahili, Twi and other cultural languages. When Sheeran teamed up with Fireboy for a remix of the song Peru, Sheeran sung a snippet in Yoruba.

“We have employees in Lagos, Accra and in Johannesburg now, as well as North Africa,” Shami said. “What's happening in Africa is very similar to what happened to Latin America with reggaeton in the last two years. We believe the next Bad Bunny will probably come from Africa.”

Fireboy said that crowds at his shows have been so enthusiastic he’s had to hit the pause button on occasion, like in Denver, when he needed to stop the show twice to get things back under control.

“I expected to see mostly Nigerians and Africans at the show,” he said. “But I saw people from the Philippines, the islands, people from different walks of life. It was beautiful.”