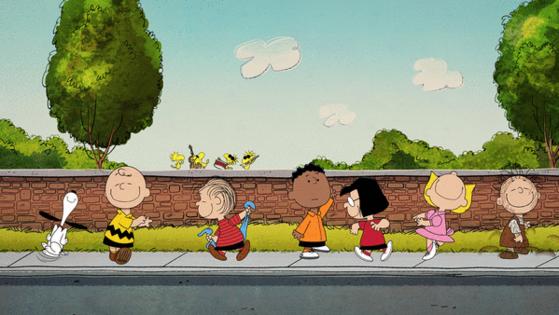 “Peanuts” fans won’t find “A Charlie Brown Thanksgiving” on traditional TV outlets — instead, they’ll have to look on a streaming service.

Apple TV+, which acquired rights to the three Peanuts-themed holiday specials in 2020, is offering nonsubscribers the chance to watch the kid-friendly prime-time favorites for free.

The Apple TV+ service — which also streams the hit shows “Ted Lasso” and “The Morning Show” — will offer “A Charlie Brown Thanksgiving” for free through Nov. 27.

The trailblazing yuletide “A Charlie Brown Christmas” special, which spawned its own ubiquitous holiday waltz “Christmastime Is Here,” will also stream free on Apple TV+ from Dec. 22-25.

The great Peanuts cord cutting started in 2020 when Apple TV+ took over the holiday specials, including the spooky “It’s the Great Pumpkin, Charlie Brown.”

It never gets old. The 25-minute special, created by cartoonist Charles M. Schulz, won the Emmy Award for outstanding individual achievement in children’s programming in 1974.

Over the decades, “A Charlie Brown Thanksgiving” has aired on CBS, The Disney Channel, Nickelodeon, ABC, PBS and Canada’s Family Channel.

Apple TV+ also has plans to air new originals featuring the “Peanuts” characters, including “The Snoopy Show,” debuting on the platform Dec. 2.