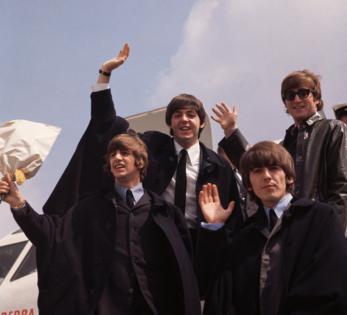 NEW YORK — A new Beatles exhibit shows much more than a day in the life of the Fab Four.

“Ladies and Gentlemen...The Beatles!” at the Prudential Center’s Grammy Museum Experience in Newark, New Jersey, explores the English band’s unprecedented popularity in the United States, including many milestone moments in New York City.

The display highlights Paul McCartney, John Lennon, Ringo Starr and George Harrison’s arrival at John F. Kennedy Airport in 1964, their debut performance on “The Ed Sullivan Show” and their iconic 1965 concert at Shea Stadium through a collection of artifacts and interactive experiences.

“They landed at Kennedy Airport after JFK was assassinated,” said Mark Conklin, the museum’s director of artist relations and programming, who organized the exhibit that opened Friday. “The country was in mourning, and here was their triumphant [arrival] on our shores at Kennedy Airport, which I think was — not just for New York but for the country — a great lift.”

“Of all the places they could land and should land, of course it was New York City,” Conklin said. “It was where they made their mark, and it’s from there where everybody in the country and the rest of the world saw them.”

McCartney’s jacket from the Shea Stadium gig, original hand-written concert set lists and a recreation of the “Ed Sullivan Show” set are among the attractions at the exhibit, which focuses on the peak years of the Beatlemania craze in the U.S.

“This exhibit is so chock full of details and the story behind their taking America between 1964 and 1966,” Conklin said. “There’s so many things to see. You could spend so much time here looking at all the artifacts. It’s a Beatles fan’s dream come true.”

Scheduled to run through June 25, the exhibit will play host to talks with Beatles experts and insiders. Friday’s opening night included a public conversation with May Pang, a former assistant of Lennon who dated the musician amid his separation from Yoko Ono during an 18-month stretch known as “The Long Weekend.”

The event included a screening of Pang’s upcoming documentary, “The Lost Weekend: A Love Story,” about her professional and personal relationship with Lennon.

“They’ll realize that maybe my time with John was just not a weekend,” Pang, 72, told the Daily News of what viewers will learn.

“I’ve held this story for so long,” she said. “It was just there, and it was a part of my life. People were just telling it, and finally I said, I have to tell my side of the story and take back my narrative.”

“Almost every record they did was something different,” said the Manhattan-born Pang, who began working with Lennon in New York City in 1970. “All of a sudden there’s orchestral stuff that came in. Then there’s all the psychedelic. Each time you heard something, it was something new.”