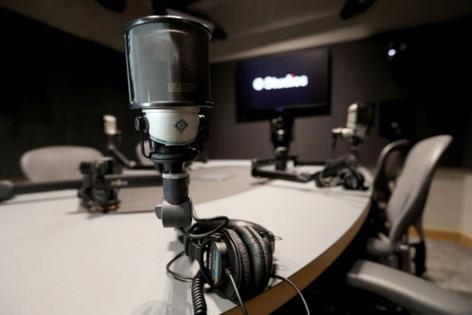 A washed-up radio host aims to clear his name by uncovering the truth behind the disappearance of three Muslim American teens. But as his investigation unfolds, the broadcaster confronts his own biases and discovers a monster that is even more nefarious than he imagined.

The 12-episode podcast — which debuted last week — marks the first audio-only series for Peele, who is best known for his big-screen horror movies such as "Get Out," "Us" and "Nope."

"Your imagination's darkest, scariest nightmare is much worse than any monster we can visualize and put in front of you," Peele wrote in an email. "So with audio horror, we are fully tapping into that idea and leveraging the imaginations of the listeners against them."

"Quiet Part Loud" also represents a test of Spotify's strategy of leaning heavily into its high-profile podcast partnerships with prominent filmmakers as the Swedish music-streaming giant looks to diversify its core business and draw more subscribers to its platform.

"We pick the things that we really know we can deliver for those high-end creators and bring their podcast to market in a way that breaks through the clutter," said Julie McNamara, head of talk studios and a vice president at Spotify, in an interview last month.

While Spotify is known for Q&A and topical discussion podcasts like "Call Her Daddy" and "Armchair Expert With Dax Shepard," it is also investing heavily in ambitious narrative podcasts like "Quiet Part Loud" with elaborate storylines and characters voiced by popular actors.

In "Quiet Part Loud," each of the roughly 20-minute episodes takes listeners on an audio journey as they travel around New York City to learn more about a terrifying monster that travels through the airwaves and is fueled by hatred. The idea, which Peele first envisioned as a TV show or movie, was tailored to become an exclusive Spotify podcast.

"It's pretty real-world and pretty terrifying at the same time, so it definitely has the DNA of the best of Jordan Peele's content," McNamara said.

Spotify agreed to pay Peele's company, Monkeypaw Productions, a producer fee of $1.35 million for Season 1 and gave the podcast a $550,000 budget, according to a producer services agreement viewed by The Times. Spotify declined to comment on the financial terms of the deal.

Kunis — who on Wednesday was named...Read More