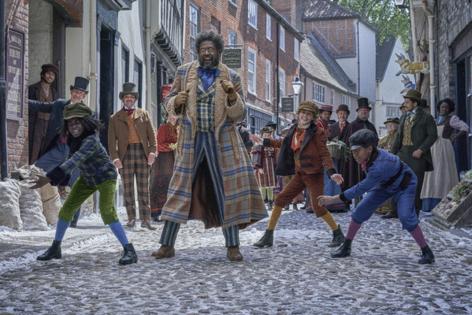 Our stockings runneth over with streaming holiday options whose titles, on Netflix and Hallmark and elsewhere, tend to blur into a single, extended holiday viewing option we’ll call “Countdown to Falling for Christmas with You on a Holidate on Mistletoe Farm All the Way.” Someone should make that one, and then we’ll be done for a while.

Meantime: Here’s a list of 10 holiday movies, nine streaming, one in theaters. Some are old. Some aren’t. Some you know. Some you won’t. Some are grisly. Most are not. Happy viewing and stay warm.

“Holiday” (1938): The grandest romantic New Year’s Eve scene in Hollywood history, and yes, I’ve seen “When Harry Met Sally.” With partygoers downstairs, Katharine Hepburn and Cary Grant, in the attic playroom of a Park Avenue mansion, find themselves edging toward a realization of what they mean to each other in director George Cukor’s exquisite film version of the 1928 Philip Barry play. On Amazon Prime, YouTube, Apple TV+ and other streaming services.

“Remember the Night” (1940): A pip, hard to find but worth the effort. In Manhattan, over the holidays, assistant district attorney Fred MacMurray feels sorry for convicted shoplifter Barbara Stanwyck (he’s the one who convicted her) so he pays her bail and brings her home to Indiana for Christmas. It’s a truly unpredictable mixture of comedy, drama, astringent family dynamics and sneaky romance. Preston Sturges’ script, Mitchell Leisen’s pearly direction, the stars! Sturges’ own assessment: “Quite a lot of schmaltz, a good dose of schmerz and just enough schmutz to make it box office.” On the fawesome.tv service, if you want to find a younger relative to help you figure that one out.

“Meet Me in St. Louis” (1944): The wintertime sequences in director Vincente Minnelli’s achingly nostalgic vision of turn-of-the-century mid-American life are just a fourth of the storyline. But every season’s wonderfully realized in this one, which comes festooned with “The Trolley Song” and “Have Yourself a Merry Little Christmas.” Judy Garland stars, and how. On Amazon Prime and other streaming services.

“Christmas Holiday” (1944): Some titles are more deceiving than others; this sinister wartime film noir from director Robert Siodmak takes the cake. It comes from the W. Somerset Maugham novel. The movie version stars a cast-against-type Gene Kelly as a murderous gambler, and Deanna Durbin, haunted by Yuletide memories she can’t forget. A “gotcha” studio marvel of vexed but finally fulfilled expectations. Streaming on Roku and YouTube.

“The Family Man” (2000): My wife’s favorite seasonal rewatch, and I love her madly, so that’s that. Selfish, acquisitive businessman Nicolas Cage learns a lesson in true commitment and what’s important from his college sweetheart (Tea Leoni) with help from an angel (Don Cheadle). On Netflix, Amazon Prime and other streaming services.

“Jingle Jangle: A Christmas Journey” (2020): Netflix’s recent original movie musical features a wealth of Black talent in a Victorian-era fantasy starring Justin Cornwell, Forest Whitaker, Anika Noni Rose and Madalen Mills. Some, including my colleague Nina Metz) have written that “Jingle Jangle” has “the makings of a classic that endures year after year.” Streaming on Netflix.

“The Noel Diary” (2022): Another Netflix holiday present, this one from the Richard Paul Evans book, about a bestselling author (Justin Hartley of “Smallville” and “The Young and the Restless”) inheriting his parents’ house after his mother’s death. Luminous Barrett Doss (luminosity: always a fine quality to have in a holiday-themed heartwarmer) co-stars as a woman seeking answers to her own family secrets. Premieres Thursday on Netflix.

“Violent Night” (2022): “Bad Santa” just got owned: David Harbour portrays a mean, bloodthirsty hombre of a St. Nick who’s apparently been watching a heavy rotation of “Straw Dogs” and “Home Alone 2″ (they’re equally sadistic) in prep for this hostage thriller in which brutal mercenaries led by John Leguizamo pay for their place on the naughty list. Premieres in theaters Dec. 2. Rated R for “really?”

“Scrooge: A Christmas Carol” (2022): We’re never far away from another Dickens “Christmas Carol” remake or two: Already on Apple TV + there’s “Spirited,” with Will Ferrell and Ryan Reynolds, and next up is the new Netflix animated “Scrooge: A Christmas Carol.” From the trailer, it looks and sounds like a variation on the 1970 “Scrooge” film but with tons more fireballs and time-traveling portals. The voice cast includes Luke Evans, Olivia Colman, Jessie Buckley and Jonathan Pryce. Premieres on Netflix Dec. 2.

“The Apology” (2022): A Christmastime housebound thriller starring Anna Gunn as a haunted mother whose child disappeared 20 years earlier. Her estranged ex-brother-in-law (Linus Roache) shows up, unannounced, with some secrets to spill along with the blood promised by debut feature writer-director Alison Star Locke. Janeane Garofalo co-stars. Premieres on Shudder Dec. 16.