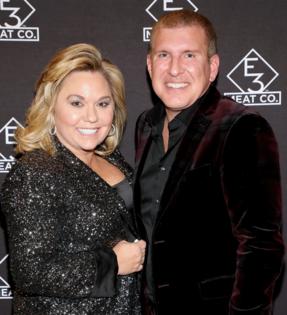 USA Network hit the the reality show mother lode in 2014 when it debuted “Chrisley Knows Best,” a sitcom-style reality series featuring an Atlanta family led by the colorful, Southern drawlin’ Todd Chrisley, who carried on like a reincarnated Paul Lynde.

While an NBCUniversal spokesman didn’t confirm the news Monday evening, Deadline said the show has been canceled but a few episodes that were taped prior to the trial will air in 2023.

The show, which specialized in “Brady Bunch”-level high jinks, became the network’s biggest reality show ratings draw, one of the last times a basic cable show of its ilk would capture the pop-culture zeitgeist before streaming began to steal away traditional TV’s audience.

“Chrisley Knows Best” would typically close with the family gathered around the bed of Todd and Julie Chrisley recounting the lessons learned from the previous 28 minutes. It felt contrived but heartfelt all at once.

Here’s a typical plot description provided by USA Network from Season 1, focused on two of their children Savannah and Chase: “When Chase and Savannah go over their credit limit, Todd makes them get jobs to appreciate their money. Savannah has to work in a clothing store, while Chase works as a caddie at a golf club. Todd and Harvey play a round of golf with Chase as their caddie, but they try to annoy him. Later, Todd accompanies Chase and Savannah to work on a farm.”

Over nine seasons, USA Network released a generous 199 original episodes. Only a handful of other shows focused on a single family have come out with more episodes, including the Roloffs in TLC’s “Little People, Big World” with 381 and the Kardashians in E!’s “Keeping Up With the Kardashians” at 285. In comparison, WE-TV’s “Braxton Family Values” aired 145, TLC’s “Here Comes Honey Boo Boo” 55, A&E’s “Duck Dynasty” 54 and MTV’s “The Osbornes” 52.

The Chrisleys would eventually move to Nashville, Tennessee, but couldn’t escape financial misdeeds that caught the attention of the federal government. Prosecutors eventually indicted them on multiple counts of tax evasion and bank fraud and a judge Monday sentenced Todd Chrisley to 12 years in prison and Julie seven years.

Just prior to the trial in June, USA Network renewed “Chrisley Knows Best” for its 10th season and aired the ninth season over the summer. The network plans to air footage it taped before the trial for a 10th season next year.

“Todd Chrisley and his entire family have opened their home and hearts to America, and we are so happy to be able to continue to grow, love and laugh with them,” said Heather Olander, senior vice president for alternative development and production for USA Network in a press release in May.

USA Network stopped shooting footage for “Chrisley Knows Best” before the trial and did not start up after the couple was convicted. During the period between conviction and sentencing, Todd and Julie Chrisley have been largely confined to their home in Nashville with electronic monitoring.

The Chrisleys plan to appeal the sentencing, but their careers as reality stars appear to be over.

In May, the network announced a dating spinoff show hosted by Todd Chrisley called “Love Limo” that was supposed to debut in 2023 but will not happen. And Deadline said sister station E! has also nixed the “Growing Up Chrisley” spinoff show featuring two of Todd and Julie’s children ― Savannah and Chase. Six episodes from season four aired on E! this past fall.

Grayson, another son, hit a truck on a Nashville highway this past Saturday and landed in the hospital with injuries, according to TMZ.