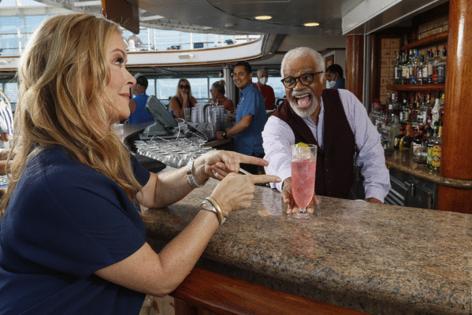 LOS ANGELES — More than 35 years have passed since the final voyage of the TV classic "The Love Boat," set aboard a luxurious cruise ship, aired in 1986. But time has not dulled the nostalgic glow around the series and its irresistible gimmick — an ever-changing rotation of major and minor celebrities involved in various rom-com adventures about the ship.

Interacting with the colorful passengers and steering them through their romantic highs and lows in every episode was the attentive crew, headed by Capt. Merrill Stubing (Gavin MacLeod). The crew members also engaged in plenty of their own hijinks.

Two of those members — Ted Lange, who played bartender Isaac Washington, and Jill Whelan, who played Stubing's daughter, Vicki — are hitting the high seas again this week, as they reunite for a reality series inspired by the vintage comedy.

The two will pop in on CBS' "The Real Love Boat," featuring singles looking for love and competing in "chemistry and compatibility challenges" aboard a Princess Cruises liner. The winning couple on the show, premiering Wednesday and hosted by Jerry O'Connell and Rebecca Romijn, will receive a cash prize and the "ultimate" luxury Princess Cruise.

"This is a cool way to bring back the essence of our show in a fresh and different way," said Whelan last week, during a visit to the ViacomCBS headquarters in Hollywood. "It's a fun opportunity for me and Ted as elder statesmen to come and talk to these kids about what love and romance really looks like."

Seated next to her was Lange, who kept praising his former co-star. Whelan has kept writing, acting and producing various projects while Lange has stayed active in the theater world as a director and playwright, with a special passion for Shakespeare.

Lange said the experience of being on "The Love Boat" was life-changing. "As I look back, I now realize how lucky I was. I was just trying to build my career, and then I hit this home run on this show. At the time, I thought it was supposed to happen. But now I say to myself, 'You're a lucky sonofabitch.'"

"The Love Boat" was a Saturday-night staple during its entire run, and the formula never deviated: three different stories all meshed together during the hour-long installments. A year following its 1977 premiere, the series was paired with "Fantasy Island," another anthology with new guest stars every week. Both were produced by TV mogul Aaron Spelling.

'I believe people remember it affectionately because they were younger when they watched it, and it's reflective of the pop culture personality of the time," said Neal Sabin, executive vice chairman of Weigel Broadcasting, which oversees the MeTV Network. The digital network, specializing in vintage TV shows, will air episodes of the series next year ("The Love Boat" is currently streaming on Paramount+).