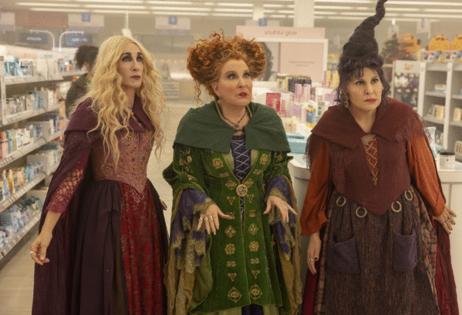 Halfway through “Hocus Pocus 2,” Bette Midler shouts off a set of direct commands. “Clear the altar, all of you! Clear my stage!” she says, sending everyone around her scurrying.

That last instruction is directed at a petrified four-person rock band, but the same could be said of the sequel itself. Debuting Friday on Disney+, the movie attempts to echo a rare feat pulled off by its 1993 predecessor: staging a musical number with villainous charisma, narrative action and a sprinkle of spookiness — a formula that reinvented a well-known song as an iconic Halloween movie moment for the film’s legion of fans.

The original “Hocus Pocus” sees Midler, Sarah Jessica Parker and Kathy Najimy as sibling witches desperate to extract children’s souls in order to maintain their own youth. The movie’s director, Kenny Ortega, who was fresh off helming “Newsies,” had previously worked with Midler as an assistant choreographer on the 1979 film “The Rose” and pitched everyone on squeezing a song into “Hocus Pocus.” The idea was initially met with some resistance — “This is a movie that puts you on the edge of your seat, and you’re going to stop it for this musical number?” said producer David Kirschner at the time, according to Bustle — but Ortega won out.

“Bette is such a brilliant artist and a courageous spirit, and she isn’t afraid to break the rules when she performs,” Ortega tells The Times. “At the time, I just couldn’t imagine getting all the way through this movie without taking advantage of her musical talent.”

The trio covered Screamin’ Jay Hawkins’ 1956 song “I Put a Spell on You” — already a haunting track in itself, due to its booming blues rhythm, overtly lustful lyrics and the R&B singer’s signature shrieks. Composer Marc Shaiman, who regularly collaborated with Midler on her musical performances onscreen and onstage, rearranged the track into a family-friendly showstopper that highlighted her soaring vocals and animated acting choices.

“That first verse had to be slower, witchy and mystical,” explains Shaiman. After Midler greeted an onscreen crowd — a reference to the famed musical “Gypsy,” in which she had just starred — “the tempo kicks in, and then it’s a full-on Bette Midler performance, with a Tina Turner or Janis Joplin kind of energy and a theatrical orchestration.”

Since Hawkins’ song is notably brief when sped up, “we thought, what can we do to make this pertain to these characters and this actual moment in the movie?” Shaiman recalls. “Bette and I, as we are wont to do, immediately started writing new lyrics. I remember we were very excited about coming up with, ‘Your wretched little lives have all been cursed/ ‘cause of all the witches working, I’m the worst,’ because we love real rhymes.”

Shaiman also added a mysterious call-and-response chant and vocal parts mimicking Midler’s real-life backup singers the Harlettes, which Parker and Najimy learned quickly. “Everything was like a kind of alchemy,” he says. “It just worked.”

The production only allowed for one day to shoot the elaborate sequence, which included the Sanderson Sisters’ bewitching performance for a costumed crowd at a holiday party and a simultaneous chase scene between three kids, a cat and a zombie. “We had to work quickly, and since Bette is a consummate live performer, you don’t need to do more than a few takes with her and Kathy and Sarah, and you’ve got it in the bag,” says Ortega.