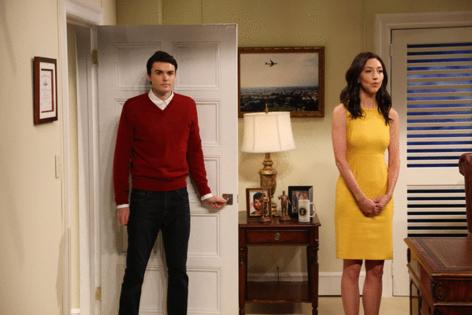 The show began with a parody of ESPN2’s “ManningCast” where former Giant Eli Manning and his superstar brother Peyton Manning offer analysis of each week’s Monday Night Football game. But on “SNL,” the pair, featuring “Top Gun” star Miles Teller playing an uncanny version of the latter Manning, pretended to analyze a sketch featuring cast members that will be seen on NBC every Saturday night in coming months. That fake sketch focused on Donald Trump’s family’s various shenanigans, which Teller’s character immediately called out as a tired idea.

“That might be the only time we see him tonight,” said Andrew Dismukes, playing Eli Manning.

When Teller asks why the bit included no fun impressions like Anthony Fauci, Lindsey Graham or Rudy Giuliani, he’s reminded those impersonations were previously performed by Kate McKinnon, who was one of several stars not to return following “SNL’s” 47th season. Other comics not returning include Pete Davidson, Aidy Bryant, Kyle Mooney, Chris Redd, Alex Moffat and Aristotle Athari.

“The show’s in a rebuilding year, for sure,” Teller said.

Holding down the Weekend Update desk for an eighth-straight year together were Michael Che and Colin Jost, who are the longest tenured hosts that segment has seen.

The 48th season of “SNL” opened under an air of uncertainty not typically associated with the long-running sketch-comedy program.

During a December interview on CBS, producer Lorne Michaels said he was committed to seeing the show through to its 50 year anniversary, but said, “I have a feeling that’d be a really good time to leave.”

Musical guests Willow and Meghan Thee Stallion will reportedly appear in upcoming episodes with the latter expected to also serve as a host.