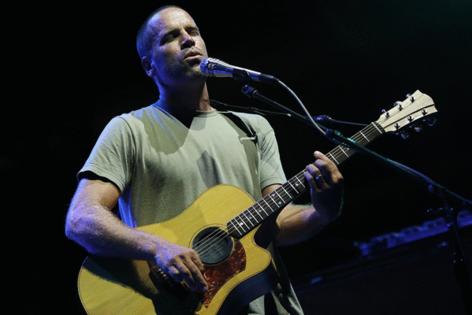 "I have to trick myself into thinking every album is my last one," said the professional surfer-turned-singer-songwriter.

"I find I write better when I'm not thinking about performing — or when I'm thinking that people may not ever hear the songs I'm writing."

Achieving such a state of mind may be a challenge for this Hawaii native.

Since the release of his 2001 debut, "Brushfire Fairytales," Johnson's worldwide album sales have topped the 25 million mark.

He has headlined such major festivals as Coachella, Bonnaroo, Outside Lands, Ohana, and San Diego's now apparently defunct KAABOO.

His concert tours see him performing in outdoor venues with capacities of 15,000 to 20,000, such as Chula Vista's North Island Credit Union Amphitheatre, where Johnson performs with his band next Friday.

"Sometimes, if I'm not careful, I can take it for granted," said the 47-year-old troubadour and happily married father of three.

"Going on tour now, for the first time in five years, is a reminder that it's a pretty special thing to sing songs — with my friends in my band — and present them to an audience that appreciates hearing them."

From its first moments, in which an employee played by Olivia Colman opens the grand, golden Empire cinema for the day, "Empire of Light" feels like a love letter to the experience of moviegoing.

The first three episodes of "Harry & Meghan," a documentary about the Duke and Duchess of Sussex, were released on Netflix Thursday after much suspense. We watched it so you don’t have to.

The iconic singer announced the news in a video posted on social ...Read More

Baby Yoda, Willow and She-Hulk are officially in the advertising business.

Walt Disney Co. on Thursday launched a new tier of its popular Disney+ streaming service in the U.S. that includes commercial breaks, in a move ...Read More

Celine Dion said she is prioritizing self-care after being diagnosed with a rare neurological disorder.

In an emotional video message to fans on Thursday, the superstar singer revealed she has stiff person syndrome, a ...Read More

Q: George C. Scott and Marlon Brando both turned down their best actor Oscars, for “Patton” and “The Godfather” respectively. Have there been any other Hollywood or ...Read More