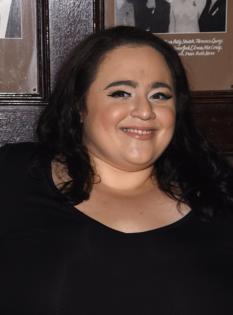 “I’ve played plenty of characters in love in my life and it has been a blessing, but the greatest blessing in life is real love, true love and I am honored to finally feel unconditional love, and a love that is pure,” the award-winning actress, dancer and singer wrote on an Instagram post in which she shared photos of the happy couple showing off their engagement rings.

Blonsky, 33, has appeared in several movies and television shows over the past 15 years. But she’s best known for playing the role of Tracy Turnblad in the 2007 movie adaptation of the John Waters classic “Hairspray” — alongside John Travolta, Michelle Pfeiffer, Zac Ephron and Queen Latifah — for which she won a Critics’ Choice Award, and received a nomination for both a Golden Globe Award and a Screen Actors Guild Award.

The Long Island, New York, native came out as gay on TikTok in June 2020, sharing a video of herself dancing to Diana Ross’ Pride classic “I’m Coming Out.”

During Pride Month his year, Blonsky shared a touching Instagram message in which she went public with her relationship with Jenson.

“I just wanted to take a moment and properly introduce you to @theyleyjo the person who makes my heart sing and the one who makes me the happiest gal on the planet,” she wrote on the social networking service in June.

Jenson, who uses they/them pronouns, describes themselves as a “nonbinary artist just making things that bring my joy, hoping to share that with others,” according to a bio on their Instagram account.

“A while back I introduced to you all a stunning human @theyleyjo as my girlfriend and now I have the honor, privilege and greatest joy of calling this incredible person my fiancé!” Blonsky wrote Thursday on Instagram.

“I am so incredibly in love with you @theyleyjo and my love for you is endless, you mean everything to me! Here’s to FOREVER my love!!!” she wrote, adding a red heart and an engagement ring emoji.