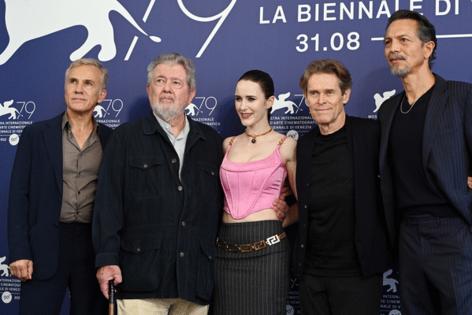 LOS ANGELES — With films such as “The Warriors,” “48 Hrs.,” “The Driver,” “Hard Times” and “Streets of Fire,” Walter Hill established a legacy as a master mechanic of genre storytelling, effortlessly mixing elements from different styles to create fresh, fascinating hybrids.

He has also returned often to the western, with “The Long Riders,” “Wild Bill,” “Geronimo: An American Legend” and Emmy-winning work on “Broken Trail” and “Deadwood.”

Written and directed by Hill, the new “Dead for a Dollar,” out now in select theaters and on video on demand, is an example of the stripped-down efficiency of Hill’s classic work, where no gesture or moment seems excessive or wasted. Set in 1897, the film follows Max Borlund (Christoph Waltz), a bounty hunter hired to bring back Rachel Kidd (Rachel Brosnahan) and Elijah Jones (Brandon Scott), a Black deserter from the U.S. Army. Rachel’s husband (Hamish Linklater) had told Borlund that Jones had kidnapped her, but the truth is something different. The cast also includes Willem Dafoe, Benjamin Bratt and Warren Burke.

Hill’s ability to cross-pollinate genre elements also includes his work on the “Alien” franchise, on which he was an active producer on the first three installments (and his name remained on other films in the series), a blend of sci-fi, horror and suspense.

In a recent conversation at his longtime Beverly Hills home, Hill, now 80, is every bit the old-school gentleman filmmaker, referring to literature and fine art as he casually skips across decades, respectful of his role as an eyewitness to moments of Hollywood history.

He recalled working out story problems while collaborating on a screenplay with John Huston. And the time Steve McQueen hurled a magnum of champagne at the head of Sam Peckinpah. (He missed.) And when his friend, French filmmaker Jacques Demy, said that Americans too often forget their own lesson — that the perfect length for a movie is 90 minutes. Talking about his long friendship with production designer and producer Polly Platt, Hill got emotional, saying, “For the tough guy action director, you may see tears form in my eyes.”

Hill recently received a special award at the Venice Film Festival, where “Dead for a Dollar” premiered. And more than anything, he doesn’t feel finished. As he said, “I’m very aware there’s less through the windshield than there is in the rearview mirror. But I’m not quite ready to sit around the house and read magazines, so I’d like to do a couple more.”

Q. People always refer to you as a genre filmmaker. Does that feel accurate to you?

A. Most of them seem to indicate that I did something with the genres and bent them and I think that is very accurate. Lo, those many years ago, when among a lot of the more intellectual people in show business — there are very few — there was a serious debate, really, whether the genres were dead and that the wave of the future was going to be a kind of personal filmmaking that got beyond genre considerations. I did not believe that. I accepted the notion that you couldn’t do the same, you couldn’t just repeat from the past, but you could mix genres — “The Warriors” is a great example, a dystopian near-futuristic movie. It’s almost half-ass a musical in itself. It’s an adventure story.

What I totally believed and still do, unless you have genre elements, the audience will not be with you. And genre elements are not necessarily as tired as everybody wants to proclaim. But even now, it’s complicated. [The Argentine writer Jorge Luis] Borges always said that the most satisfactory stories for an audience is when the ending is foretold, they know how it’s going to end and they want that ending. Now, the other side of that coin is you have to give them something foretold that completes the dance, but at the same time you have to present it in a way that’s novel enough that it doesn’t seem endlessly repetitious. That’s somewhat the trick of it.

The cast of NBC's hit sitcom "Cheers" is raising a glass to their late co-star Kirstie Alley.

Alley, who died of cancer at age 71, co-starred alongside Ted Danson, Kelsey Grammer and Rhea Perlman, who each fondly ...Read More

Awards season greetings! What you have here is the Gold Standard's first batch of acting power rankings where, yes, this week, it's a man's man's man's world. (We'll get to the women next week.) These are the performances ...Read More

In “Empire of Light,” Sam Mendes casts a nostalgic eye toward the movies. Like several other auteurs this winter season, Mendes has crafted what could be considered a “love letter to cinema” (see also: Steven ...Read More

In Los Angeles, Ice Cube sparked the rise of gangsta rap as part of N.W.A in the late '80s, before Snoop Dogg broke out...Read More

A historical epic based on the real-life Agojie woman warriors of the Dahomey Kingdom tops the DVD releases for the week of Dec. 13.