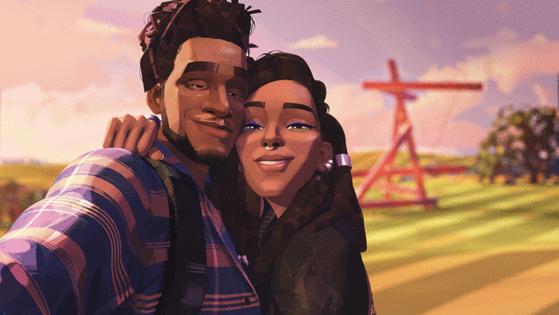 "Entergalactic," premiering Friday on Netflix, comes from Scott Mescudi, who makes records as Kid Cudi, under which moniker he's also releasing an album of the same name. Originally intended as a series, its episodes have been smushed together into a 90-minute movie marked by chapter headings. This feels right, given that it plays like a feature, a sweet, corny and fairly adorable rom-com, temperamentally old-fashioned but made newfangled by virtue of being animated and the musical tie-in. (The songs are in the picture; the picture illustrates the songs.)

Created by Mescudi with Kenya Barris ("black-ish"), with a story by Mescudi and a teleplay by Maurice Williams and Ian Edelman — who gave the world the great, underappreciated "How to Make It in America," in which Mescudi co-starred — the show was written to fit the album, described by Mescudi as "a suite of songs on the beauty of being freed by love." Romantic comedy feels like a natural extension of Mescudi's songwriting, with its recurrent themes of personal growth.

The plot is simple, following the venerable arc of "boy meets girl, boy loses girl, boy gets girl." (Sorry if that constitutes a spoiler, but if it is you need to watch more movies.) Jabari (Mescudi) unadvisedly hooks up with Carmen (Laura Harrier), a former girlfriend he hasn't seen in several months, just before he meets fated-to-be-mated new neighbor Meadow (Jessica Williams); misunderstandings lead to alienation, which leads, inevitably, to reconciliation. (This is not a dark drama.) The framework would have served Cary Grant and Irene Dunne well in their day, though they would have been living on the Upper East Side, drinking cocktails instead of smoking weed — and not having sex, of course, until just after the closing credits. (That the characters hail taxis instead of calling for ride-shares feels like a nod to an earlier New York.)

Jabari is a street artist known for a figure he paints on buildings and buses, Mr. Rager (a reference to a Kid Cudi song, album and alter ego); he's just been hired to develop the character into a comic book, which is presumably how he's been able to afford that light-filled, double-level loft in Lower Manhattan — "this one-percent-ass apartment," as a friend describes it. Meadow, whom Jabari first encounters in a "West Side Story" dance-at-the-gym moment, as the party she's throwing fades around her, is a photographer about to exhibit in a group show.

As is traditional, he's got a couple of goofy friends, Jimmy (Timothée Chalamet) and Ky (Tyrone Griffin, a.k.a. Ty Dolla Sign), who give him questionable advice; she's got a smart one (Vanessa Hudgens as Karina), whose counsel is good. (Women — including Mescudi's own sister, Maisha Mescudi, as Jabari's sister — are the more evolved characters here.)

If a little unformed and less than completely honest with himself, Jabari is a decent guy. Walking alongside Meadow, he takes the chivalrous curb position; he counsels a friend, "Stop saying 'bitches.'" There is an appealing modesty to the courtship, which progresses by steps from shy looks and nervous banter, to awkward hugs, to a classic bonding walk in the rain, to an equally archetypal romantic montage: Jabari and Meadow ride bikes, take photo booth pictures. He watches her work in her darkroom; she looks over his shoulder as he draws. They hang out on the couch, take a train to an art park. They brush their teeth side by side. It's not the kind of story where characters sleep together first and figure things out later. (For contrast, a joke about a popular, skanky dating app runs through the chapters.) Not that there won't be things to figure out.

Entirely recognizable and geographically correct, director Fletcher Moules' painterly, psychedelicized New York is full of life and light. "It just gets me tight that people equate New York with gray and darkness when the city's mad colorful," says Nadia (rapper 070 Shake), an artist who paints giant cutout pictures of pizza slices and the Statue of Liberty. It's the film's aesthetic credo. Parks and storefronts, bodegas and bars, a farmers market and the Flatiron Building are all represented; that's clearly a Mark di Suvero sculpture at the art park.

The animation has the step-framed look associated with anime, an economic convenience that has become a deliberate style. If the characters do at times exhibit the expressiveness of the Sims, it's visually appealing overall, with smart camera angles and framing and well-limned details. And there are the practical advantages that come with making a cartoon: innumerable locations employed without permits or rental fees; a cast (including Macaulay Culkin as a long-haired street sage, Arturo Castro as an unhelpfully helpful office mate and Christopher Abbott as Meadow's photo rep) that would be harder to wrangle were they required to wake up early and sit for makeup and wardrobe; and the freedom for actors to play characters they never could in their own bodies. (Mescudi is 38 and Jabari clearly much younger.)

And there is the freedom to go wild, to comment graphically on the action. There are fantastical scenes — dreams, nightmares, drug-induced visual distortions. Jabari's paintings come alive. (The great Keith David makes a brief appearance as the voice of Mr. Rager.) As an expression of the central love metaphor, Jabari and Meadow float in space amid stars and nebulae, the "galactic" of "Entergalactic."

Notwithstanding a few side plots — his job, her show — love and relationships occupy center stage in most scenes and conversations, as well as the songs that run on the soundtrack: "This is the day I've been waiting for … Your touch paralyzes me in the morning/ And I don't want you to go/ sincerely yours forever more." "Love is the easiest thing in the world when it happens by accident," Jabari's sister tells him, "but it doesn't get real until you do it on purpose." The climax of the film — involving a speech to a roomful of people meant for one particular person, a message in spray paint and a hurried trip to a significant location — is straight out of "Notting Hill," if Richard Curtis were a Black, 21st century New York hip-hop musician. It works quite nicely.