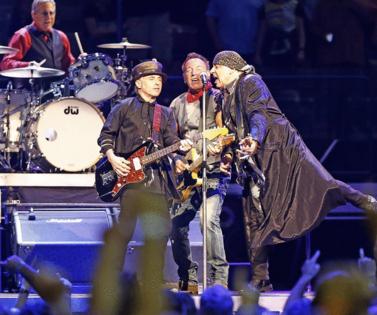 The Boss is getting a chance to do what he always wanted to do.

Bruce Springsteen has announced that his next album will be a collection of soul music covers that will pay homage to the old school. Titled “Only the Strong Survive,” the project will be released Nov. 11 on Columbia Records.

On the 15-track opus, the 73-year-old Rock & Roll Hall of Famer will add his stamp to songs previously performed by Aretha Franklin, Diana Ross & The Supremes, The Temptations, Four Tops, The Commodores, Jerry Butler and transgender pioneer Jackie Shane (“Any Other Way”), among others. The full track listing is below.

“I wanted to make an album where I just sang. And what better music to work with than the great American songbook of the ‘60s and ‘70s? I’ve taken my inspiration from Levi Stubbs, David Ruffin, Jimmy Ruffin, the Iceman Jerry Butler, Diana Ross, Dobie Gray, and Scott Walker, among many others,” Springsteen said.

“I’ve tried to do justice to them all — and to the fabulous writers of this glorious music. My goal is for the modern audience to experience its beauty and joy, just as I have since I first heard it.”

“Only the Strong Survive” was the title of a chart-topping song Butler recorded in 1968. It was also the name of a powerful 2002 documentary that “Showbiz 411″ columnist Roger Friedman helmed, which paid homage to stars from R&B and soul music’s heyday from the late 1950s to early ‘70s.

With Thursday’s announcement of the album, a Thom Zimny–directed music video for Springsteen’s cover of Frank Wilson’s “Do I Love You (Indeed I Do)” was also released.

“Only the Strong Survive” follows Springsteen’s 2020 album “Letter to You.”

In Los Angeles, Ice Cube sparked the rise of gangsta rap as part of N.W.A in the late '80s, before Snoop Dogg broke out...Read More

A historical epic based on the real-life Agojie woman warriors of the Dahomey Kingdom tops the DVD releases for the week of Dec. 13.

A detective falls for a beautiful murder suspect. But that's just the beginning of the experience of "Decision to Leave." In the hands of South Korean master Park Chan-wook ("Oldboy," "The Handmaiden"), that familiar noir ...Read More

Michelle Yeoh was having a flashback, not of the acid variety, but it was pretty intense all the same.

She was seated in the middle of the Paramount Theatre in Austin, Texas, in March for the South by Southwest premiere ...Read More

SAN DIEGO — Richie Furay has never lived in San Diego, but the 1997 Rock & Roll Hall of Fame inductee and co-founder of the pioneering bands Buffalo Springfield and Poco can credit the city for twice playing a key role ...Read More