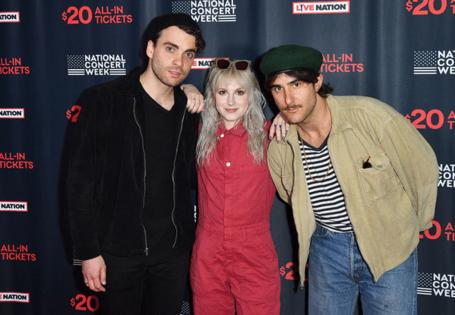 LOS ANGELES — Twenty years ago, if you told Paramore vocalist Hayley Williams that she'd become one of the most influential pop singers in America, she might have offered little more than a scowl. As a DayGlo-haired punk sprite, miraculously gifted with the lung capacity of a Southern church choir, she couldn't have seen it then — nor could her childhood friends-turned-bandmates, Zac Farro and Taylor York — but Paramore would go on to craft songs that would alter the trajectories of rock and pop.

Artists such as Olivia Rodrigo, Demi Lovato and Willow Smith have all cited Paramore's music as the blueprint for their own snarling pop-punk confessionals. For her 2021 hit "Good 4 U," Rodrigo gave Paramore a songwriting credit, citing the verses of their 2008 song "Misery Business," a scathing missive to Williams' teen rival.

"What feels most merciful about it is that we didn't know we were doing anything different back then," Williams tells the Los Angeles Times inside the band's North Hollywood studio, her neon locks now a mulled shade of amber. "I use the word 'merciful' because we could not have predicted that people would give a s— 20 years later. We were just eating peanut butter and living the dream."

Behind a wall of Marshall stacks and assorted trunks of gear, Williams, 33, drummer Farro, 32, and guitarist York, 32, nestle into a leather couch. Williams' charismatic goldendoodle, Alf, holds court in the studio: he tramples over Williams, curls his body around Farro's neck like an exquisite wriggling scarf, then finally curls himself into a ball next to me. Williams, donning a white hoodie emblazoned with the words "Main Character" in rhinestones, chuckles at her dog's audaciousness; "I'm so sorry. He's such a star," she says.

The band has officially just wrapped production on its upcoming album "This Is Why," set for release on Feb. 10. The lead single of the same name — and the band's first new offering since the 2017 album "After Laughter" — is a funky tapestry frilled with tambourines and angular dashes of guitar. Paired with a crisp "Mod Squad"-evoking video, directed by Turnstile frontman Brendan Yates, "This Is Why" weaves in tendrils of rock 'n' roll's past but lodges the band firmly back into the foreground of pop's present.

The band first teased "This Is Why" in September, with a photo of the players' faces smushed against glass. It called to mind the stifling social restrictions brought on by COVID-19, and the residual hostility between people. "This is why I don't leave the house," Williams sings bitingly on the new track, "You say the coast is clear/ but you won't catch me out!"

"How sad it is that we've gone through this horrible thing globally, as humans," says Williams. "Whether it's racism, or conspiracy theories … I think about how the internet is supposed to be this great connector, but drives us further inward and further apart. I've watched people be so awful to each other. How could we go through these things together and come out worse?"

Ironically, Paramore is gearing up to greet more people than they have in the last four years combined — this fall, they will hit the road for the first time since 2018. Kicking off on Oct. 2 in Bakersfield, the tour includes shows in L.A. on Oct. 20 and 27, and three nights at the sold-out pop-punk and emo festival When We Were Young, scheduled for Las Vegas on Oct. 22, 23 and 29.

Paramore will co-headline the fest with another essential emo group, My Chemical Romance. Yet there's a catch: They may have to perform at the same time on opposite stages.

"They want war!" jests Williams, a longtime MCR fan. "We did not think there was going to be the kind of demand there is. We're careful about how we engage with nostalgia; five years ago we would have said 'absolutely not' to this. But I think it's significant that we feel confident enough to maintain the journey that we've been on and celebrate with these fans."