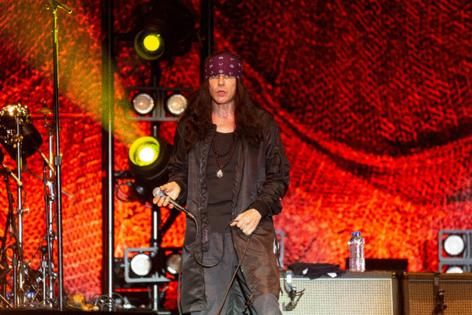 It’s the band’s first new record since 2016’s “Hidden City,” and while it was primarily recorded during the pandemic, the roots of these songs go back decades.

“This new album is a really honest, authentic depiction of where we are today,” vocalist Ian Astbury said during a phone interview from his home in Los Angeles as The Cult prepared for its latest tour.

“It’s a very focused record and it’s layered, it’s dense, it’s celebratory and it gets dark,” he continued. “There’s a lot in this record. It’s an amalgamation of The Cult’s major influences, the DNA of the band all culminating in a very special moment.”

Not long ago, he was reviewing old footage from the Provinssirock music festival in Finland, where the band performed in 1986. It reminded him of walking around at 3 a.m. under the Arctic sun and seeing people lying in the grass, just hanging out, drinking wine and having a good time. He also remembered the colorful rows of flowers that covered the front of the stage.

“It was a beautiful atmosphere at this festival,” he said. “It was such a beautiful, perfect moment where everyone was connected and it’s the type of moment you wish you could take with you everywhere you go.”

Astbury used those old fuzzy feelings as inspiration for songs like “Give Me Mercy,” which is the first single off the album and sounds like a classic Cult song thanks to Astbury’s commanding vocals and guitarist Billy Duffy’s melodic riffs that hearken back to the duo’s iconic ’80s sound. Though sonically it feels like a throwback, the lyrical content speaks to today’s social climate.

“The song is really a plea for communication, a new language,” he explained. “We’re all talking, but no one is hearing each other, nobody respects the fact that people have different cultural values.”

While the new album consists of just eight songs, Astbury said it’s about the quality, not the quantity.

“Those eight songs tell a specific story, they belong together,” he said. “We tried putting in other songs, but we felt it was too much paint in one canvas.”

The Cult was founded nearly four decades ago by Astbury and Duffy, around the same time the big hair metal bands were on the rise. But the rockers made a name for themselves as post-punk, alt-goth royalty with a steady stream of hits like “She Sells Sanctuary,” “Love Removal Machine,” “Wild Flower,” “Fire Woman,” “Sweet Souls Sister” and “Edie,” which all earned plenty of airplay on influential alt-rock stations, and they had several music videos showcased on MTV.

Thanks to its devoted fan base, The Cult continues to make new music, sustain a steady touring schedule and top the lineups of major rock festivals.

“We’ve just always been authentic,” Astbury said of the band’s longevity. “It’s always been about embracing ourselves and our flaws and all your self deprecating thoughts and everything you go through.”