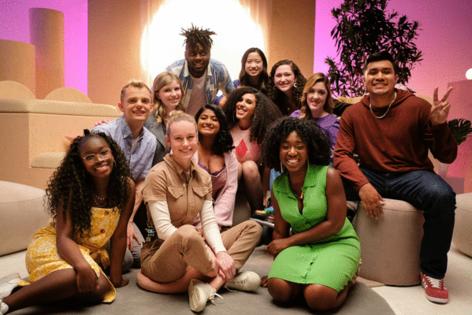 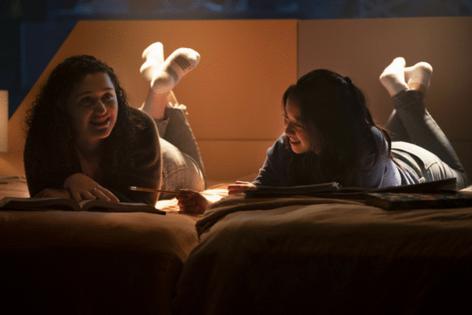 That's what Clark Summit natives Isabel Lam, 20, and Clare Della Valle, 21, did when they were contacted by the producers of "Growing Up," a Disney+ docuseries created by "Captain Marvel" star Brie Larson that highlights the stories of 10 young adults. Lam and Della Valle had earned national attention for helping to organize a Period Day rally in Philadelphia, and Disney+ wanted to feature the childhood best friends in the new show's first season.

"Growing Up" premiered Sept. 8 with an entire episode dedicated to Lam, now a University of Pittsburgh junior, and Della Valle talking about their formative years in Lackawanna County and how they started a chapter of "PERIOD: The Menstrual Movement" at their high school in an effort to promote menstrual equity and acceptance among their peers.

"We're from a small town in northeast Pennsylvania," said Della Valle, now a junior at Cornell University. "The thought that you can click on my face on Disney+ is insane."

Lam said she used to feel like a bit of an outsider in Clark Summit because she was one of the few Asian Americans in town. She said many locals refer to it as "the bubble" due to its insularity. That said, both Lam and Della Valle love their hometown and agreed having each other made growing up there a much more pleasant experience.

Much of their "Growing Up" episode is dedicated to the "PERIOD" chapter they started at their high school, which has continued to work toward the goal of erasing the stigmas surrounding menstruation. They got quite a bit of pushback from teachers, parents and their peers at the time, but Lam and Della Valle were able to lay a strong foundation. The club has continued to hold regular meetings and provide students with menstrual products long after their graduation.

"It's so amazing to see how it's come to fruition," Lam said. "Nowadays, my siblings are telling me that if someone is on their period, it's a given that there's free menstrual products in the bathrooms for students to use."

As far as Lam is concerned, ending up at Pitt was the "best decision of my life." She's majoring in political science and economics while also serving as the vice president of operations on Pitt's student government board. Della Valle, who is studying industrial and labor relations at Cornell, has only gotten to visit her at Pitt once so far but enjoyed her time here. She is currently studying abroad at Trinity College Dublin in Ireland.

Della Valle and Lam first heard from the "Growing Up" team in February 2020. They said the original idea was to do most of the filming documentary-style in Clark Summit, but the COVID-19 pandemic forced the production team to pivot and shoot their episode in a Brooklyn studio with actors standing in for their old classmates and teachers. Their "Growing Up" episode also includes a few scenes toward the end shot on Pitt and Cornell's campuses.

Overall, it took about two-and-a-half years from that first email for "Growing Up" to come together. Neither Lam nor Della Valle had any experience in the entertainment industry going into this endeavor. Both credited Larson, who directed their episode, for making them feel comfortable and safe while telling their stories.

"Brie is so down to earth and nice," Lam said. "It's very crazy to think we've known her for years now, plural. From the start, it was clear that she wanted to find the best way to deliver our story. Her dedication and availability was always something we really appreciated."

As Della Valle put it, "The fact we can say we know an Avenger is pretty cool." She said they tried to extract Marvel Cinematic Universe secrets from Larson while on set, but she was "like a lockbox" and gave them nothing.

Another huge part of their "Growing Up" experience was participating in confessional interviews conducted in the same room as all the other "heroes" featured on the show. Lam and Della Valle said it was helpful to hear in real time that their "Growing Up" castmates could relate to their adolescent experiences and feelings. They're still in communication with many of those folks via an ongoing group chat.

"When you're able to share and connect with other people, that's how community is made," Della Valle said. "And I think we both found community in the other heroes on the show."

While Lam said she had fun making "Growing Up," "you probably won't see me at casting calls" going forward. Working on this show gave her a deeper appreciation of who she is and the sacrifices her parents made to give her and her siblings the best lives possible.

"They came to this country with nothing," she said. "Being able to highlight my cultural identity has been a pretty big moment for them, and I'm glad I could make them proud in some way — because I'm insanely proud of them and the rest of my community."