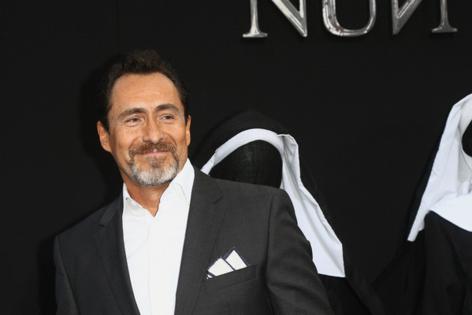 The veteran Mexican actor shares that philosophy with Carlos Galindo, the undocumented immigrant he played in 2011's "A Better Life." His wrenching portrayal of the hardworking gardener struggling to make life better for himself and his defiant teenage son earned him an Oscar nomination for lead actor while also introducing him to American audiences.

But Bichir also understands that there can be exceptions to the "good parent" code — particularly if your child is a vampire.

That's the dilemma faced by Bichir's latest father figure, Mark Kane, in "Let the Right One In," Showtime's adaptation of the popular 2008 Swedish film about a frail youth who befriends his mysterious young neighbor, unaware she is a vampire.

In the series, Kane, a former New York chef, returns to Manhattan with his vampire daughter, Eleanor (Madison Taylor Baez). Kane is desperate to find a cure for his child, but in the meantime he must constantly hunt for new victims, kill them, drain their bodies of blood and bring the vital fluid home for Eleanor to consume — all without getting caught. Making that situation more difficult is his neighbor, homicide detective Naomi Cole (Anika Noni Rose) and her bullied son Isaiah Cole (Ian Foreman).

"In 'A Better Life,' there's a line I will never cross. Everything I do and say is being watched by my kid, so I better do the right thing," said Bichir, who is also a producer of the series, premiering Oct. 7. "But 'Let the Right One In' shows the ultimate line-crossing that any parent would do for his kid. You have to kill in order to keep them alive. You're not only protecting them and keeping them safe, but you're literally feeding them."

The portraits of the two fathers represent bookends to the last decade or so of Bichir's impressive career, in which he's bounced regularly between his home country and the U.S. Although he had long been among Mexico's most highly regarded actors, "A Better Life" — along with a recurring role on Showtime's "Weeds" — served as his calling card to Hollywood, landing him in several films including "The Hateful Eight," "Che," "The Nun," "Alien: Covenant," "The Heat" and "Godzilla vs. Kong," as well as FX's "The Bridge." And his list of credits keeps growing. He just completed work in Italy with Salma Hayek on "Without Blood," which is written, produced and directed by Angelina Jolie and based on Alessandro Baricco's novel of the same name.

But "Let the Right One In" is new terrain for the actor: a leading role in a buzzworthy genre property from the network behind last year's fall breakout "Yellowjackets."

"I've been very, very blessed in many different ways," Bichir said during a recent stop at Showtime's West Hollywood headquarters. "When I grew up in Mexico doing theater with my family and I wanted to be an actor, I never thought of things happening like this. I never, ever dreamed of such a beautiful life."

Clad in a black shirt and trousers, the actor was charming, upbeat and down-to-earth. At one point, he requested that everyone gathered in the large space, including publicists, journalists and others, pose for a group photo so that he could mark the occasion.