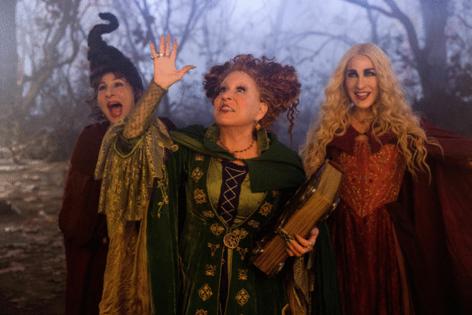 So many different kinds of not-great or even not-good movies lay siege to our affections, for reasons to do with why people love movies in the first place. Maybe the star is really cute. Maybe we just enjoy the people on the screen, even if the script’s lousy and the pacing’s weird. Maybe we were sick at home and it was on and that was enough to place it somewhere comfortable in our memory.

Or perhaps it was a “kids’ movie” from Disney, and it was a lot messier and odder and frankly more out of control than the usual Magic Kingdom picture circa 1993.

Set in Salem, Massachusetts, it starred Bette Midler in her high Disney period, with Sarah Jessica Parker and Kathy Najimy as the other two Sanderson sisters trying to suck the life out of children’s souls because … well, because. It’s one of the jankiest movies ever, with mood swings that risk whiplash.

A lot of the first film’s cast has returned for this Disney+ streaming sequel “Hocus Pocus 2,” arriving Friday. So. Trick? Or treat?

Well, you tell me: What’s halfway between trick and treat? That’s “Hocus Pocus 2.” It manages to tell its story straight, so that’s a huge improvement over the first one. There are some laughs, and director Anne Fletcher — like Kenny Ortega, who did the first one, she’s dance-trained and a veteran choreographer — manages a far smoother amalgam of effects, mood swings, mugging, headless-zombie comic relief and heartstring-yanking that miraculously almost kind of partly works. All in all, it’s twice as good as “Hocus Pocus.” It’s easier to write that if you didn’t like “Hocus Pocus.”

Prologue: in Old Salem, in classic Witching Times, the Sanderson girls are teenagers, and “Hocus Pocus 2″ is their origin story. Hannah Waddingham of “Ted Lasso” gets things off to a promisingly overripe start as a one-woman coven out in the woods, passing along her big book of spells to young Winifred.

Zwoop, it’s 2022, and a new generation of witch-curious high schoolers takes center stage. These aren’t witches, mind, simply fledgling “mystics,” especially Becca (Whitney Peak, very good). She’s presently on the outs with one friend (Lilia Buckingham), the daughter of the Salem mayor (Tony Hale). But with friend Izzy (Belissa Escobedo), Becca retreats to their favorite spooky spot in the woods on Halloween night, where by accident they conjure the return of the Sandersons.

Honestly, that’s enough plot, though screenwriter Jen D’Angelo has lots more. The jokes and scares operate in better proportion (i.e., more jokes) this time. The witch-out-of-water setup places Midler, Parker and Najimy in strange new surroundings, including the local modern-day apothecary. ”It glows from within! With a sickening light!” Midler cries, astonished by the sight of a nocturnal Walgreens.

The conflict hinges on the young teens trying to prevent the “gothic Golden Girls” from destroying Salem out of sheer spite. The mission of “Hocus Pocus 2″ is to lure “Hocus Pocus” fans, one and all, to their couches to sit back as they tick off the in-jokes. (At one point Midler’s Winifred, on her broom and hovering outside a living room window, spies on a snugly couple watching none other than “Hocus Pocus.”)

Midler: She’s fun. She relishes turns of phrase and googly-eyed reaction shots so broad, you half-expect the action to move to Boston or anywhere bigger than Salem, out of sheer necessity. Each time Midler has a line ending in a word like “pest” or “lackeys,” the s’s go on an extra second or two, as if she were getting paid by the duration of the sssssssssssss. She’s funny! I mean, I love Bette Midler in general. Najimy and Parker remain valiantly shameless comic company as well.