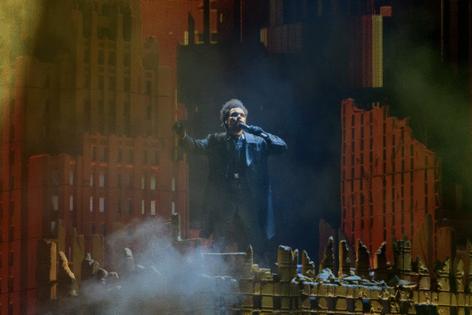 LOS ANGELES — Save your tears for another day: The Weeknd will return to Los Angeles on Thanksgiving weekend for a pair of performances to make up for his abruptly canceled Sept. 3 show.

The "Save Your Tears" and "Blinding Lights" crooner will be back at SoFi Stadium in Inglewood on Saturday, Nov. 26, after rescheduling the previous show "due to unforeseen circumstances," his team and concert promoter Live Nation announced Tuesday.

Those "unforeseen circumstances" involved the 32-year-old losing his voice only three songs into his sold-out set earlier this month. It was during the second of his two-night appearance at SoFi.

The Weeknd also announced a new performance there "due to overwhelming demand," which he'll perform on Sunday, Nov. 27. The new, next-day concert will close out his 2022 all-stadium tour that kicked off in Philadelphia in July.

"The newly added date will be the last chance for fans to see this tour and its next-level production in North America," a statement from the artist's team said. "The stadium tour has been an incredible success, selling out every show across 20 dates, breaking attendance records and grossing over $125 million dollars to date."

Concertgoers replacing their Sept. 3 concert tickets will have their tickets transferred automatically to the Nov. 26 date. If unable to attend, they can request a refund until Oct. 27, but it doesn't seem like their original tickets will be valid for the Nov. 27 show.

The Weeknd suddenly cut short his Sept. 3 concert while performing his hit "Can't Feel My Face." He then walked offstage and another number played until the house lights came up. The performer then returned onstage, telling the audience that he had lost his voice and apologized for canceling the show.

"doctor says my voice is safe and with rest i'll be solid and able to bring the show my TORONTO fans are waiting for," the Weeknd, whose real name is Abel Tesfaye, said in an Instagram post at the time.

On Sunday, the Weeknd teased his return to the City of Angels with a haunting concert video posted on the platform.

"LOS ANGELES… i'm coming back for you! don't forget about me. stay tuned," he wrote.