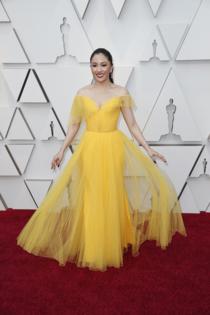 Months after returning to social media after nearly three years, the "Crazy Rich Asians" star said Friday that an unnamed producer had sexually harassed her on the set of "Fresh Off the Boat." Wu addressed that at the Atlantic Festival and spoke about her upcoming memoir, "Making a Scene," which includes details about her time on the TV series.

"I did have a pretty traumatic experience my first couple years on that show, and nobody knew about it because that show is historic for Asian Americans," she said at the event. "And it was the only show on network television, in over 20 years, to star Asian Americans, and I did not want to sully the reputation of the one show we had representing us.

"So therefore, I kept my mouth shut for a really long time about a lot of the sexual harassment and intimidation that I received the first two seasons of the show," she added.

The "Hustlers" star said on Friday that after the series' first two seasons, she was "no longer scared of losing my job" and built up the confidence to start "saying 'no' to the harassment, 'no' to the intimidation from this particular producer."

From 2015 to 2020, Wu portrayed the matriarch of the central Huang family on "Fresh Off the Boat." During Wu's first year on the show, the producer allegedly touched Wu inappropriately while they were at a sporting event, she wrote in the book, according to the New York Times.

The New York Times also reported that in her memoir, Wu said the producer — whom she refers to by only an initial — "controlled her, demanding that she run all her business matters past him and telling her what to wear."

Representatives for ABC declined to comment when reached by the Los Angeles Times.

Wu said Friday that few people knew about the unnamed producer's abuse, but that "it felt like a betrayal every time" she saw those people "being buddy buddy" with him.