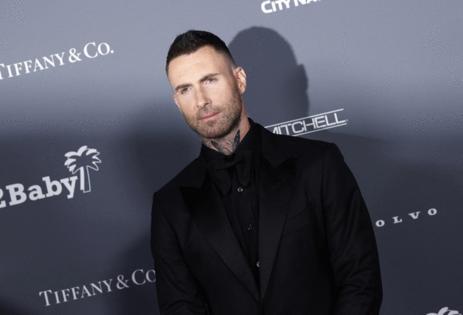 Levine seemed to be moving on from the scandal nearly unscathed in new photos with pregnant wife Behati Prinsloo. On Wednesday, TMZ posted pictures of the singer with Prinsloo in Montecito, California, with both of them wearing their wedding bands, exchanging smiles and holding hands.

TMZ reported that "there's really no apparent sign of tension between" the couple, despite the recent cheating claims.

Levine's professional life also seems untouched by the claims. Maroon 5 is heading to Las Vegas on Oct. 1 for "The Event," a benefit hosted by the Shaquille O'Neal Foundation, where they will perform alongside H.E.R., Maren Morris, John Mulaney and Pitbull.

The drama began Monday when Instagram model Sumner Stroh, 23, alleged on TikTok that she had been "having an affair with a man who's married to a Victoria's Secret model." She said it was Levine, 43, and shared screenshots of their private messages.

A day later, Levine denied Stroh's claims of an affair.

"A lot is being said about me right now and I want to clear the air," Levine said in a post to his Instagram stories on Tuesday. "I used poor judgment in speaking with anyone other than my wife in ANY kind of flirtatious manner. I did not have an affair, nevertheless, I crossed the line during a regrettable period in my life."

Levine might have cleared the air, but more women came forward with alleged flirty messages from the singer.

Also coming to light amid Levine's alleged infidelity were previous comments he made about cheating.

When Cosmopolitan magazine asked him, "Why do guys cheat?" in 2009, Levine said, "monogamy is not in our genetic makeup."

"People cheat. I have cheated," he said. "And you know what? There is nothing worse than the feeling of doing it."

ATLANTA — In 2020, A&E was riding high with a hugely successful “Live PD” series where live cameras followed cops on patrol in different cities, an unedited version of “Cops.” But after the George Floyd murders ...Read More