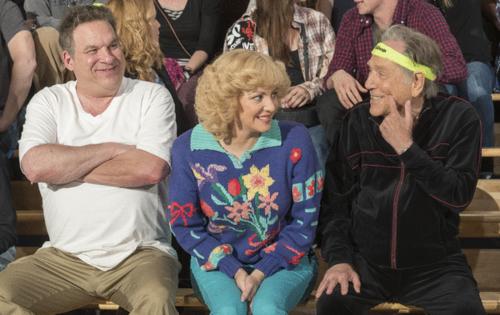 The Philadelphia-inspired sitcom "The Goldbergs" began its 10th season Wednesday without Murray, the pants-hating Eagles fan played by Jeff Garlin.

After playing Murray for the show’s entire run, Garlin exited in December following an investigation into alleged misconduct on the set and was ultimately written off the show.

So how did "The Goldbergs" do away with Murray? They hit the fast-forward button.

The first episode of the new season begins several months after Murray’s death. As an adult Adam (voiced by Patton Oswalt) sums up the events that have happened since last year’s season finale, the camera focuses on Murray’s empty chair.

“Just a few months ago, out of nowhere, we lost my dad,” Adam says as the music turns solemn. “We will always love you dad, always. And we’ll find a way to continue on together, because after all, we’re the Goldbergs.”

The episode never mentions how Murray died, but given the reasons for Garlin’s exit, it’s surprising how much of it is focused on the show’s missing patriarch.

Adam (Sean Giambrone) plays a "Field of Dreams" prank on Barry (Roy Gentile) not realizing the father-son connection in the film. Beverly (Wendi McLendon-Covey) reveals her shrine full of Murray’s clothes in the upstairs closet, and in a bid to purge gets rid of her late husband’s well-used recliner (referred to as “Mr. Chair”). That upsets Erica (Hayley Orrantia), who is pregnant and now married to Geoff (Sam Lerner).

As with just about every episode of "The Goldbergs," there is an emotional reconciliation in the third act, one which involves the missing chair and Ben “Pop Pop” Goldberg (played by TV veteran Judd Hirsch).

LOS ANGELES — Twenty years ago, if you told Paramore vocalist Hayley Williams that she'd become one of the most influential pop singers in America, she might have offered little more than a scowl. As a DayGlo-haired punk...Read More

"I've had people dress up as ...Read More

That's what Clark Summit natives Isabel Lam, 20, and Clare Della Valle, 21, did when they were contacted by the ...Read More

Trevor Noah’s time on “The Daily Show” is coming to a close, the Los Angeles Times has confirmed.

While taping the series on Thursday, Noah revealed to his audience that he will be departing the late-night series. ...Read More