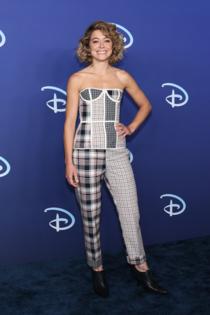 In the first episode of "She-Hulk: Attorney at Law," audiences not only learn how Jennifer Walters gains her superpowers — they also discover that she's a tad obsessed with Steve Rogers' sex life. It's something she keeps pestering her cousin Bruce Banner about until he reveals whether Rogers ever lost his virginity.

One of the things about the Disney+ series that struck Mark Ruffalo, quoting head writer Jessica Gao, is "how horny-forward [the story] is" compared to the rest of the Marvel Cinematic Universe, he shares with a laugh. Ruffalo, who has been playing Banner and his alter-ego Hulk since 2012's "The Avengers," also enjoys how "She-Hulk," which launched Thursday, "just takes the piss out of a lot of the superhero macho stuff and kind of the toxic, male Reddit culture" that at times permeates certain fandoms.

It also helps that the show is genuinely funny.

"My favorite type of comedy is taking these big, high-concept things such as a Hulk — who can save the world and is one of the strongest beings on Earth — but then really grounding that in our reality," says Gao, who also serves as an executive producer. "What I love about our show is that we're taking the time to really just turn the camera a little bit to the left and see what's going on in [their] everyday life."

Created for television by Gao, "She-Hulk: Attorney at Law" follows Jennifer Walters, played by Tatiana Maslany, after an accident leads to her exposure to Banner's gamma-irradiated blood. Despite gaining the ability to transform into a powerful, giant, green version of herself, though, Walters insists she will keep living the same life she did before the accident.

"Unlike her cousin the Hulk, she retains her sense of self and her consciousness," says director and executive producer Kat Coiro. "Whether she is Jen Walters or She-Hulk, she's the same person. And yet, when you present so differently, when you are suddenly green and gigantic and every eye in the room turns to you when you walk in through a door, you do modulate your personality."

The series explores how Jen learns to navigate a world that treats her differently according to her form at the time and the distinct perceptions and expectations through which our culture views women and their bodies. And from the first episode, "She-Hulk" does not shy away from addressing how women like Jen live with constant pressure to control their rage and fear in a way that men like Banner do not have to.

One of the other differences between Jen and Banner is that Jen is uninterested in giving up her life — including her job and her friends — in order to become a superhero. Below are some of Jen's key relationships introduced in "She-Hulk" so far.

Jen's best friend is Nikki Ramos, played by Ginger Gonzaga, who also happens to be her paralegal. Gao describes the pair as "true ride-or-die friends [who] have this very comfortable ease about them."