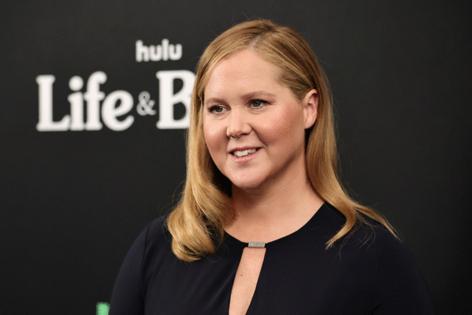 But the comedian claims she wasn't "shading Spider-Man" with her own "important mental health announcement."

On Sunday, the "Life & Beth" star shared a video on Instagram jokingly vowing to "do more social media" to protect her mental health. Schumer posted the clip a day after Holland uploaded a similar but sincere video announcing his social media hiatus and encouraging his followers to donate to a charity focused on mental health.

"I find that looking at my phone for eight and a half hours a day is helping me, and it's helping this pimple patch and this breakout," Schumer says in the clip.

"Being in my 40s, it's actually really good for me to watch all of 'Love Island' and all of the 'Bachelors' — whether in paradise or just normal mansions. So you'll be seeing a lot more of me on social media just for my physical and mental well-being."

On Twitter, some criticized Schumer for allegedly making fun of Holland for being open about his mental health journey.

"Amy Schumer? You mocking a person raising awareness and providing tools for young people to deal with their mental health is precisely the reason why Tom Holland stays away from toxic social media," tweeted @Maracev. "Thank you for proving his point."

"THIS IS WHY MENTAL HEALTH ISNT TAKEN SERIOUSLY BECAUSE STUPID PEOPLE WANT TO BUTT IN AND CRACK JOKES WHEN ITS NOT A FUNNY SITUATION," tweeted @nwhpeters. "amy schumer keep your irrelevant self away from tom holland."

According to E! News, Schumer responded to the backlash Tuesday in an Instagram Story that has since expired. In a brief statement, the comic clarified that she was actually making fun of herself — not the "Spider-Man" star — and acknowledged that "of course social media is toxic."

After recently keeping a low profile on Twitter and Instagram, Holland explained over the weekend that he finds social media "to be overstimulating" and "overwhelming."

"I get caught up, and I spiral when I read things about me online, and ultimately, it's very detrimental to my mental state," he continued. "So I decided to take a step back and delete the [Instagram] app."