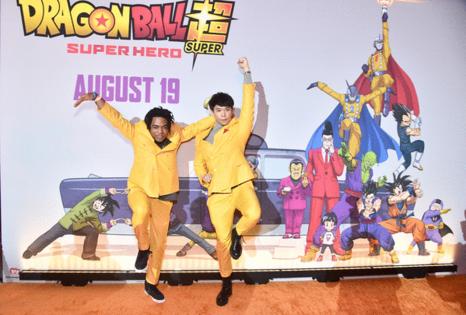 One of Japan's biggest pop media franchises, "Dragon Ball" is synonymous with explosive brawls and over-the-top action sequences with dashes of comedy providing levity in between. "Dragon Ball Super: Super Hero" delivers these signature elements in spades in a story that celebrates how the green alien warrior Piccolo has long been "Dragon Ball's" best dad.

Boasting the involvement of "Dragon Ball" creator Akira Toriyama for its original story, screenplay and character design, "Super Hero" — directed by Tetsuro Kodama — revolves around heroes and villains who are all navigating the legacies and ambitions of their (absent) fathers and grandfathers. It's a nuance that's touched on in the exposition heavy introduction of the film, but best understood by those who are familiar with the "Dragon Ball" franchise, which launched with Toriyama's manga series in 1984.

For the uninitiated, "Dragon Ball" primarily follows Goku, an orphan invader-turned-refugee of a powerful alien warrior race who grew up on Earth, and his perpetual quest to grow stronger as he faces off against humans, other aliens, androids and even different levels of gods. In between training, various tournaments and battles over the fate of the universe, Goku has made friends and enemies, gotten married and had a couple kids (who, unlike their father, have interests outside of becoming the most powerful warrior to ever live).

"Super Hero" shakes things up by turning its spotlight on a couple of "Dragon Ball's" popular but often underutilized supporting characters: Goku's eldest son Gohan (Masako Nozawa in Japanese, Kyle Hebert in the English dub) and Gohan's mentor Piccolo (Toshio Furukawa, Christopher Sabat), who especially shines as the heart of the film.

As explained in the movie, Gohan has long shown he has the potential to be an even greater warrior than Goku (Nozawa, Sean Schemmel). But the kindhearted half-human is more concerned with his scholarly pursuits than keeping up with his training, especially because Gohan knows his father will always jump up to handle whatever powerful threats arise.

It's a fair expectation on Gohan's part — Goku has always been a bit more focused on becoming the best fighter he could be over being the best father. But Gohan can always count on Piccolo, his intimidating grump of a mentor, to not only push him toward reaching his full potential as a warrior but also give him lessons on being a good dad. Piccolo's heartwarming dynamic with Gohan's 3-year-old daughter Pan (Yūko Minaguchi, Jeannie Tirado) is among the "Super Hero" highlights.

Anime fans who have kept up with "Dragon Ball" through its most recent series, "Dragon Ball Super," will likely make up most of "Super Hero's" U.S. audience. But besides a mostly inconsequential scene of cameos, even a casual fan who has watched only through "Dragon Ball Z" — the second "Dragon Ball" anime series, which started airing in the U.S. in the '90s — is plenty equipped to keep up with the film's main story and will likely appreciate this focus on Piccolo's bond with Gohan and his family.

The movie's main antagonists are the next generation of the Red Ribbon Army, an evil organization first thwarted by Goku when he was a kid. Although the new Red Ribbon Army's leader Magenta and hired head scientist Dr. Hedo are also each contending with the shadows cast by their father and grandfather, respectively, the setup is more a cute novelty than a commentary on family legacy. Their story eventually takes a back seat to the spectacular action sequences that lead to various powerful transformations.

As the title suggests, "Dragon Ball Super: Super Hero" engages a bit with questions of what it actually means to be a hero beyond flashy poses and comic sound effects. It also touches on timely themes involving the powers of misinformation and lies to cast heroes as villains (and vice versa) in order to manipulate others. But "Super Hero's" main priority is letting Gohan and Piccolo dazzle together in glorious combat against a couple of charming villains — Gamma 1 (Hiroshi Kamiya, Aleks Le) and Gamma 2 (Mamoru Miyano, Zeno Robinson) — and then an even more powerful, if familiar, foe. Even the film's stylish 3D computer animation is best suited for these action sequences.

"Dragon Ball Super: Super Hero" is a must see for fans that salutes one of the series' best relationships, but newcomers interested in more than the fun of an action-packed visual spectacle might want to check out some of the TV series first.

MPAA rating: PG-13 (for some action/violence and smoking)