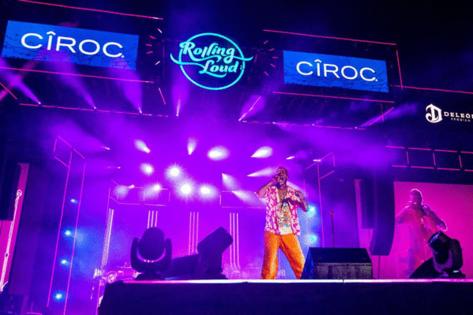 Kid Cudi had a stroke two weeks after checking himself into rehab for his mental health in 2016, the rapper revealed in an interview published Wednesday.

While speaking with Esquire magazine, the 38-year-old musician and actor recalled spending a few months in physical rehab to recover from the stroke, which landed him in the hospital and slowed his movement and speech. After the medical event, Cudi's manager and childhood friend Dennis Cummings encouraged him to take a break from music.

The "Pursuit of Happiness" hit-maker didn't fully feel like himself again until the following year, when he auditioned for "Lobby Hero," a Broadway play about law enforcement. While preparing to read with Michael Cera for the project, Cudi had to memorize a hefty amount of dialogue. Though he didn't end up getting the part, the Grammy winner credits the experience with helping him heal from the stroke.

"I proved to myself that I could do it. I needed that at the time," he said. "I was happy. Like, damn, my brain is still strong. I didn't lose something in that s— that happened."

In 2016, Cudi announced on Facebook that he was going to rehab for "depression and suicidal urges." At the time, the "Man on the Moon" artist had just come off of a two-week cocaine binge and realized that he had an unhealthy relationship with making music, which had become a coping mechanism.

Cudi's mother, Elsie Mescudi, also opened up to Esquire about praying with her son and visiting him every day in rehab.

"The hardest thing I have ever had to do was to wait until they were ready for him to call me," she said.

"It was the best thing that could have happened to Scott. ... There is no saying, 'My child won't do this. My child won't do that.' ... You don't know what they're going to do from moment to moment, and certainly, when you get to the point where your career blew up overnight, it's a very difficult thing."

In recent years, Cudi has become somewhat of a spokesperson for mental health. Earlier this year, the recording artist was invited to speak at an event for the Youth Anxiety Center, where he discussed his stint in rehab and experiences with depression. Last year, entertainment peers in his documentary, "A Man Named Scott," described him as a champion for emotional wellness that inspires other people to be vulnerable through his work.

"It's a lot of pressure, but it keeps me alive," Cudi said of his status as a mental-health advocate. "It doesn't stress me out. ... It keeps me thinking, 'Nah, Scott. You gotta be here. Let old age take you out.'"

"I actually can say, at 38, that I love myself," he added. "And I couldn't have said that six years ago. I can say that with confidence now and truly believe it, and it shows."