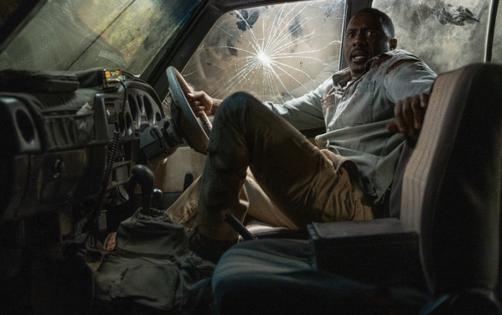 I squared up with “Beast” in full-on beast mode, meaning: pad, pen, popcorn and proportional expectations. Expectations somewhat exceeded! Turns out “Beast” is a fairly good, pretty brutal, dumb-smart survival thriller made with a clear, even reductive sense of purpose.

Idris Elba stars, which helps — though his role will frustrate some, I suspect, with its beaten-down, essentially reactive function. “Beast” needs a charismatic actor at its center, otherwise it’d be literally nothing but bites (feline) and bytes (digital). This is a project all too dependent on the quality of its computer-generated cat. (Visual quality of lion: quite good.)

Screenwriter Ryan Engle wrote the Dwayne Johnson giant gorilla bummer “Rampage,” but he atones for that here to some degree. “Beast” tells a two-species tale of grief over the death of loved ones. After the passing of his beloved but estranged wife, New York-based doctor Nate (Elba) has brought his daughters played by Iyana Halley and Leah Jeffries to South Africa for a safari, and a visit to their mother’s ancestral African village. The family is hosted by Nate’s old friend (Sharlto Copley), who takes an intensely personal interest in fighting the illegal poachers going after the lions and other animals native to the savanna.

The prologue depicts the nocturnal slaughter of an entire pride, with the exception of the bloodied and now vengeful rogue lion bent on teaching his enemies, the humans, a lesson. This is poor timing for Nate and his girls, though you know how these movies go: What’s bad for short-term survival odds is generally favorable for long-term family healing.

The experience of watching “Beast” is simple: lull, attack, lull, attack, followed by close-ups of cat-scratch gristle and bone, followed by the older daughter’s anger over how Nate handled the marital separation just before the girls’ mother received her cancer diagnosis.

Director Baltasar Kormakur is a survival-drama specialist, having put vulnerable humans at risk on high (“Everest,” 2015), in hurricane-threatened waters (“Adrift,” 2018, with Shailene Woodley) and other locales. The Icelandic-born director favors lengthy, handheld takes in “Beast,” some of which appear to be real and artfully staged, others digitally stitched-together to create an illusory single shot. The idea is to immerse us, along with Nate’s family, in this place and one scare after another.

As with so much of this director’s work, I’m in the middle on “Beast,” though its efficient running time puts it a notch above. Like many of his previous films, this one has the advantage of modest scale and a passing interest in human resourcefulness under extreme duress. It has also the disadvantage of spectacle that is more technical than artistic.

For fans of “Monty Python’s Flying Circus,” watching “Beast” may recall memories of the “Scott of the Antarctic” sketch, in which the explorer unaccountably took on a stuffed lion on a beach somewhere in England. Nothing quite so silly happens in this movie. But there is a fine, ripe, audience-rousing moment where the younger daughter grabs a tranquilizer dart and takes care of business, proving that hands-on experiential learning is always best.

The climax suggests a warm-weather equivalent to the bear attack in “The Revenant.” If that’s your thing, this may be, too.