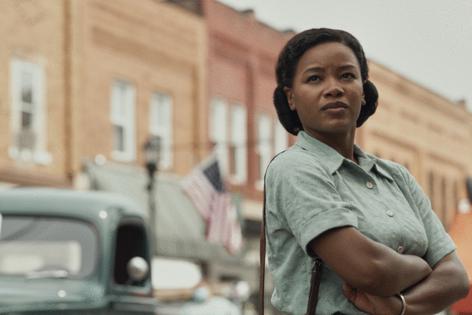 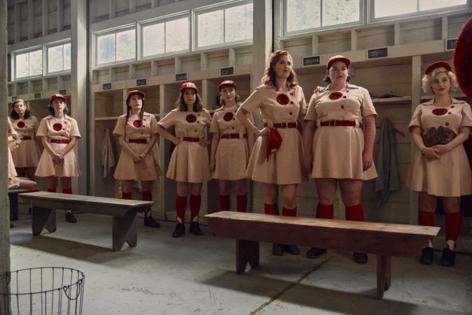 In adapting “A League of Their Own” into a new drama series for Amazon, co-creators Will Graham and Abbi Jacobson weighed every potential Easter egg, callback and quote from the beloved 1992 film with a fan’s sensibility: their own.

“We were pinching ourselves with excitement and fear that we get to do this,” Graham said of their reverence for the film, set against the formation of the All-American Girls Professional Baseball League, and for the female ballplayers of the 1940s and ‘50s who inspired it. When it came to a certain famous line, though, they weren’t sure it fit the story they wanted to tell.

“They’d hear the name of the film and say, ‘There’s no crying in baseball!’” said Jacobson (“Broad City”), who also stars in the series, of those they told about the adaptation. Then Graham dropped it into an episode draft, thinking, “We’ll probably not wind up doing it,” he said. But in the context of the series’ new lineup of characters, each of whom is navigating both the pressures of the league and her place in America circa 1943, the words took on new dimension.

With more room to explore an array of racial, gender and sexual identities within the ensemble, “League” deepens thematic seeds planted in Penny Marshall‘s classic. So the line stayed in, employed at just the right moment to nod at the original while underscoring the remake’s more contemporary interests. “Because I think part of what’s underneath it,” says Graham, “is that, well, there is crying in baseball.”

Not that many tears are shed in the series, now streaming on Prime Video. But it has a lot more than just baseball on its mind. Where the film tracks the rivalry between sisters Kit Keller (Lori Petty) and Dottie Hinson (Geena Davis) as they become Rockford Peaches at the start of the AAGPBL, the series follows all-new aspiring players Carson Shaw (Jacobson), a married catcher from Iowa; Greta Gill (D’Arcy Carden) and Jo Deluca (Melanie Field), streetwise besties from New York City; and Lupe Garcia (Roberta Colindrez), the team’s driven star pitcher.

Expanding on one of the film’s most memorable moments, in which an unnamed Black woman (played in an uncredited role by DeLisa Chinn-Taylor) forcefully throws a ball over Dottie toward home plate, the pilot sees pitching phenom Maxine “Max” Chapman (Chanté Adams) throw a bomber across the field to prove her skills at the league’s open tryouts. Because Max is Black, she’s not even allowed to compete — launching her own parallel journey over the season as she fights to play the sport she loves, any way she can.

The co-creators were grateful to speak with Marshall prior to her death in 2018. “We wanted to make sure she knew how much we loved the film that she made,” said Jacobson. “We want to continue and showcase the spirit and the joy and the grit and athleticism and all the things we loved about it.” Marshall in turn told them about her original four-and-a-half-hour cut of “League” and what she wasn’t able to include in the film, said Graham. “She also said, ‘These stories changed my life. And I think they will change yours too.’”

The show’s creative team, led by a full-time researcher, interviewed historians and surviving members of the league, pored over letters and memorabilia and collected untold stories rarely centered in movies and TV depicting the period. As a result, queer, Black and Latinx lives are explicitly centered in its interwoven narratives.

“The original movie was like a Trojan horse — it’s a good time, it’s fun and you don’t realize you’re watching something that was really groundbreaking at the time because you’re just on the ride and having a good time,” said Graham. “I think part of what drew both of us to this was knowing that, looking into the real stories, there’s a gigantic queer story here that is fun and joyful without looking away from the hard parts of it. There are plenty of those too.”

At the center of that story is Jacobson’s Carson, who becomes a reluctant leader of the Peaches. With her husband at war, Carson finds herself on an unexpected journey of self-discovery as she comes into her own on the team and strikes up chemistry with the Peaches’ glamorous first baseman, Greta.