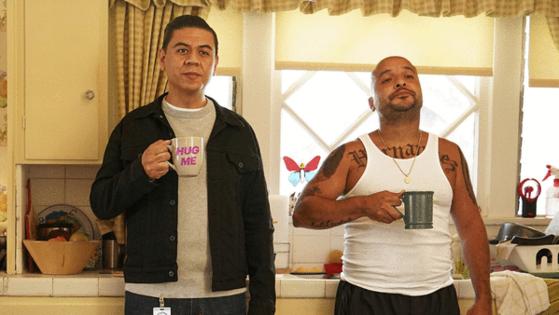 “This fool” is such a great slang, usually meaning something along the lines of, “This clown over here ...” But my favorite is when it simply refers to the person next to you who isn’t necessarily doing anything out of the ordinary. Just the act of existing in this ridiculous world means we’re all “this fool” at various points in our lives. And if you can’t find the humor in that, what are we even doing here?

“This Fool” is also the title of the single-camera Hulu comedy series starring comedian Chris Estrada. Set in the working class environs of a Mexican American community in South Central Los Angeles not unlike Estrada’s own, he plays Julio, a 30-something who is the opposite of cool — at home and at work, he’s often the butt of the joke — but if you squint, he has his own kind of cool. He’s cultured-ish! He likes a nice cup of pour-over coffee!

He’s a caseworker at Hugs Not Thugs, a nonprofit that offers support for former gang members and ex-cons — one of whom is his cousin, Luis (Frankie Quiñones). By temperament, the pair (both live with Julio’s mom and grandmother) could not be more different, and this comedic tension is ongoing throughout the season.

Julio has a touch of Ted Lasso in him. Maybe a sliver of Fred Armisen’s deadpan instincts too, which is ironic since Armisen is an executive producer here (and shows up in a cameo as well). Estrada isn’t the show’s straight man so much as a mostly grounded presence around which so much chaos can orbit. Julio’s upbeat disposition is masking plenty of unresolved issues, but he’s fairly comfortable with who he is and he’s not terribly concerned with fitting into rigid ideas about masculinity. And he’s putty in your hands if you tell him he’s a good guy. His persuasive pitch to a doubting gang member touring Hugs Not Thugs goes something like this: “Look, you’re gonna do what you’re gonna do. But studies show that the life expectancy of a gangster, on average? 24 years old.” But the life expectancy of a guy more like Julio? 76. “Don’t be late for orientation, there’s going to be orange juice!” he adds merrily, waving after the guy.

By contrast, Luis is impulsive and caught in a trap of puffed-up macho posturing and Quiñones plays him as simultaneously exasperating and endearing. There’s a moment when he is mimicking Austin Powers doing the “sh-sh, sh-sh” thing, as he tries to get someone to stop talking — don’t ask, it makes sense in the scene — and it’s hilarious precisely because you don’t expect this guy to go around quoting “Austin Powers.”

Fresh out of prison, Luis is stumbling through his new reality, half annoyed, half willing to give it a shot. Early on, he decides to take down an old nemesis and he tries hitting up his boys to form a crew, but strikes out again and again — one has died, one has a bad sciatic nerve, another just doesn’t feel like it. Luis himself has pulled a muscle in his neck and is battling acid reflux.

Turns out, his nemesis is in no shape to fight either. The old days this is not, so these would-be combatants find themselves bonding as they turn to watch a couple of nearby teens pummel each other in the park instead. If nothing else, “This Fool” doesn’t pretend hypocrisies and shifting alliances aren’t a daily part of life. Flaws and contradictions are ever-present and a source of considerable humor here. These fools! I mean!

Shot in warm, sunny tones, the show folds the high jinks of a sitcom into a indie cinema framework. Visually and thematically it comes together beautifully, except for the portions involving Julio and his on-again/off-again girlfriend Maggie (Michelle Ortiz). Theirs is a sour, unhealthy dynamic, which would be less of an issue if you believed they were even attracted to one another — or liked one another — amid their dysfunction. The Maggie scenes just don’t work as written.

That stands out because, otherwise, the show is filled with thoroughly realized supporting characters. If “This Fool” gets a second season, I’d love to see even more time spent with Julio’s mom (Laura Patalano), who works for a cleaning service in an office building and insists that everyone at home use the scratchy, single-ply toilet paper she pilfers, instead of wasting money on the softer, store-bought kind. “I came to this country with nothing!” she mutters. “I worked three jobs and raised three kids all by myself!” This, clearly, is a refrain they’ve heard many times over. It would have been fascinating to see an episode told entirely from her point of view (we get a few glimpses but not enough), with an emphasis on how she feels about these two knuckleheads in her house. Julia Vera is also terrific as Julio’s seen-it-all abuela, who chafes (literally; that damn toilet paper!) under her daughter’s rigid rule-making.

The performances on the show are full of small but sly moments, and even actors with supporting or one-off roles are given room to bring a little extra something, be it an unexpected line reading or facial expression. That says a lot about the careful way “This Fool” has been constructed. You never know what a project is like behind the scenes, but what’s on-screen here doesn’t suggest there are egos that need to be protected because someone else on set was momentarily funnier than the show’s stars.