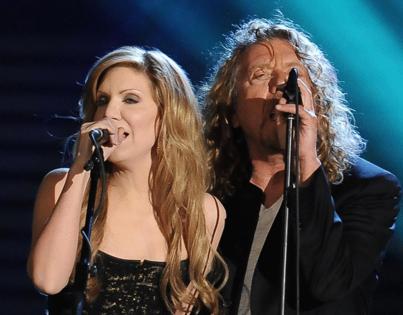 "It's a beautiful evening here," said the 73-year-old singer best known as the golden-god frontman of Led Zeppelin. "That said, in the U.K. we're unaccustomed to 38 degrees Celsius" — about 100 degrees Fahrenheit — "which is what's been going on today. There's a major panic around the country with the water supplies.

"So: lovely, but also a little ominous."

The description isn't a bad one for the music Plant makes with Alison Krauss, the veteran bluegrass singer and fiddler he met nearly 20 years ago when they sang together as part of a Lead Belly tribute concert. In 2007, the two teamed with producer T Bone Burnett for an album, "Raising Sand," which showcased their haunting vocal interplay in lushly arranged roots-music renditions of old songs by Gene Clark, Allen Toussaint, Townes Van Zandt and the Everly Brothers. Commercially speaking, the LP was hardly a sure thing (though Burnett had recently overseen the smash soundtrack for "O Brother, Where Art Thou?"); nevertheless, "Raising Sand" went on to sell more than a million copies and win six Grammy Awards, including album and record of the year.

Now, Plant and Krauss, who's 51, are on the road behind a long-awaited follow-up, "Raise the Roof," which came out late last year — inside the eligibility window for the upcoming 65th Grammys — yet sounds like it could've been made just weeks after its predecessor. Produced again by Burnett, who assembled a top-flight band including guitarists Bill Frisell and Marc Ribot and drummer Jay Bellerose, the gorgeously spooky "Raise the Roof" features more tunes by Toussaint and the Everlys along with oldies by Bert Jansch, Anne Briggs and Merle Haggard; it also has an original by Plant and Burnett, "High and Lonesome," and opens with a relatively new song in "Quattro (World Drifts In)" by the Arizona-based indie-rock band Calexico.

Krauss, who recently lent her vocals to Def Leppard's latest album, joined Plant on the call from Nashville, Tennessee.

How would you describe your relationship beyond the music?

Plant: That's probably right. I do still like you, though.