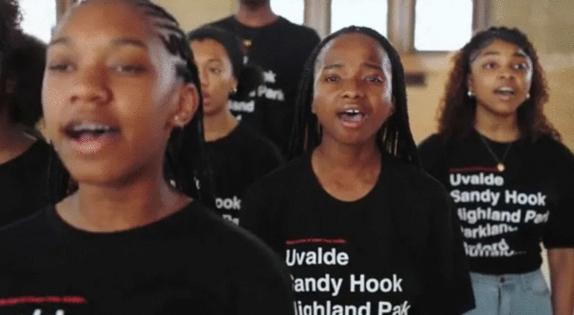 The performance, released Tuesday morning, was inspired by 11-year-old Layla Salazar, one of 19 students killed in a mass shooting in May at Robb Elementary School in Uvalde, Texas.

The video ends with actual footage of Salazar. The entire 55-member choir wears T-shirts listing the names of cities where mass shootings have occurred, including Oxford. Detroit born rapper Jayla Smalls, 21, known as IndigoYaj, who was part of the choir during its star-turning run in 2019 on NBC's "America's Got Talent" when it finished second, also performs.

"We wanted to pay homage to those young people who lost their lives," said Anthony White, the Detroit Youth Choir’s Artistic Director. "That really touched our kids. And it made the project personal."

The video and song are the latest by Detroit Youth Choir to tackle a serious issue and push for change, though White says their goal isn't to be political.

Last year, the choir — which also is gearing up to debut its docuseries, "Choir," on Disney+ in 2023 — released "Georgia's Changing," an updated version of "I am Changing" from "Dreamgirls," in response to the state's changing political demographics before the runoff for a U.S. Senate seat there. And in 2020, it released its version of "Glory," which called for racial equality.

For one DYC member, Gwendolyn Jackson, 15, of Detroit, "Sweet Child O' Mine" and its push to address gun violence was personal. She was 5 when her father, Marcel Jackson, was shot and killed in 2012. An average of 12 children a day die from gun violence in America, according to the New England Journal of Medicine.

Director Anthony White gets ready to lead The Detroit Youth Choir as they perform “God Bless America” before a crowd of more than 108,000 fans at the Michigan vs. Washington football game at Michigan Stadium in Ann Arbor.

"The victims of gun violence are not only those who were killed, it’s also the injured, the ones who witnessed the horror, or like me, who lost a father at the age of five," said Jackson in a press release. "Young people in this country have an underlying sense of fear at the movie theater, school, a concert, or at a shopping mall and that’s not right."