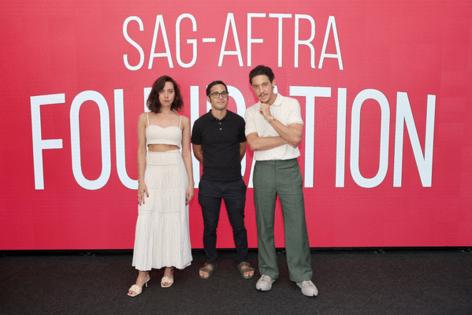 At first, Aubrey Plaza is a little defensive when it's suggested that "Emily the Criminal" seems like a bit of a departure for her.

"Everything's a departure for me," the actress says during a recent video interview in advance of the film's release last week. "I mean, I don't feel like ... I've treaded on the same territory in a while."

Yes, yes, sure. We just mean that the steadily busy Plaza — whose career has included black comedies such as 2017's "Ingrid Goes West" and 2020's "Black Bear" and who arguably still is best known for portraying April Ludgate on the NBC sitcom "Parks and Recreation" for several seasons — doesn't need her comedic gifts for the titular role of a film she sees as "a thriller."

"It's definitely not a comedy — that's for sure," Plaza says. "That was definitely something that was appealing about this movie."

In "Emily the Criminal," Plaza's Emily starts out as a young woman drowning in college-loan debt. Because she has a DUI and an aggravated assault on her record, the best job Emily can get is in food delivery.

When she agrees to take a shift for a co-worker, he thanks her by giving her an introduction to a gig as a "dummy shopper," which, she learns, involves buying goods with a stolen credit card. After her first attempt is successful, she accepts increasingly risky work from the handsome and charismatic Youcef (Theor Rossi), bringing in serious money for herself.

As the story progresses, Emily has some scary moments, and she has to make lightning-quick choices regarding whether to venture deeper and deeper into this potentially dangerous world.

"What's fun about the part for me was tracking all of those micro-decisions and steps that she takes to get to the place where she is by the end of it — and to make those moments feel real," Plaza says. "That's what was challenging, I think, about that kind of character."

Plaza also is a producer on the drama, as is Tyler Davidson, whose northeast Ohio-and-Los Angeles-based Low Spark Films has been involved in making movies that include "Take Shelter," "The Kings of Summer," "The Land" and "Galveston."

"Tyler's the best," Plaza says. "We really adopted the mentality of Emily to make this film. We had to make up the rules ourselves."