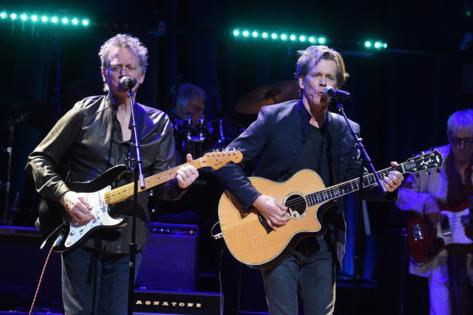 Brothers Michael and Kevin Bacon don’t always agree on everything.

After performing an eclectic mix of music together for nearly three decades as the Bacon Brothers, the duo have a fairly different approach and aesthetic when it comes to creating music. While they agree that the songs themselves are more important than trying to stick to any one specific sound, they’re not afraid to blur genre lines, which is evident in their latest EP, “Erato.”

“We are a songwriting band,” Michael said during a recent phone interview also joined by Kevin. “We live and die on the songs.”

Though both brothers are busy with their day jobs and families, they make time for music. Michael is a college professor and TV and film score composer. Kevin, yes that Kevin Bacon, is an award-winning actor known for films like “Footloose,” “Mystic River” and “Apollo 13” and TV shows like “The Following” and his latest series, “City on a Hill.” Earlier this year, the pair carved out time to work on new music and will be sprinkling fresh tunes into their upcoming live sets.

When it came time to write the songs for the new EP, Kevin said he was struggling for inspiration. One day Erato, the Greek goddess of lyric poetry, randomly popped into his mind.

“I think maybe she could have been a crossword puzzle clue that my brother shared,” Kevin said during a phone interview. “I was having a hard time coming up with something to write and then I read about her and thought, ‘OK, maybe I can write a song about her.’ In a weird way it worked, and she inspired that song. She was my muse.”

While Kevin evoked the spirit of a Greek goddess to get his writing juices going, Michael found inspiration while digging through decades of music clips for films and television shows that he had stored on reel-to-reel tapes. As he went back to preserve his work by digitizing and better organizing his files, he began to stuff old ideas into a folder simply titled “cool stuff.” There was one piece of work in particular that caught his attention. It was something he’d written for a TV show over 20 years ago that wound up in the song “Let Me Happen to You Girl.”

“When we were thinking about this record, I pulled that out and I just wrote a song on top of it,” he said. “That’s something I don’t think I’ve ever done in my whole career.”

The “Erato” EP was also an opportunity for the Bacon Brothers to work with musician and songwriter Desmond Child, a Songwriters Hall of Fame inductee that has written hits for artists like Aerosmith, Bon Jovi, Joan Jett, Alice Cooper and Ricky Martin. The brothers and Child collaborated on the pop-rock song “In Memory (Of When I Cared).”

“It was super cool and also unusual for us,” Kevin said of the pairing. “We can count on one hand the times we’ve had songwriting sessions with other writers, which we are starting to enjoy and get into more often. We spent one day in the studio just hanging out and the second day we took it away and started to come up with the song. It was super poppy and it still is a pop song, but we wanted to give it a bit more of a rockin’ feel, so that’s the production concept we came up with.”

Furthering the family aspect of the Bacon Brothers EP, Travis Bacon, the son of Kevin and his wife, actress Kyra Sedgwick, produced the track “Karaoke Town.” Travis has his own recording studio and is the guitarist of the metal band Black Anvil.

“I had written that song in a super folky sort of dial, but I really wanted to take it out of that and give it an edgier kind of backing soundtrack,” Kevin said. “So, I gave it to Trav and I knew he would have a good sense of this. He’s also a composer, so he has that skill as a programmer. I just gave him some general direction and he crushed it.”

As for what the Bacon Brothers listen to in their spare time, Kevin said he and his wife flew out to Las Vegas to see Bruno Mars and Anderson .Paak’s Grammy award-winning ’70s funk-inspired project Silk Sonic. He also noted that he recently enjoyed dinner with a group of “young people” who offered suggestions on artists he should be listening to.

“I quickly scrambled to write down all of these artists they said I should be checking out,” he shared with a laugh. “I sat in my car yesterday at the airport and made a playlist of songs that they were recommending, so I’ll be taking a spin through that a couple of times.”

“One of the great things about doing interviews with my brother is we find out a lot of stuff about each other,” Michael said, admitting he knew nothing about Silk Sonic. “I tend to not be somebody who is drawn like a moth to a flame to pop music or rock music, but if I hear Kevin mention a band more than a couple of times, I’ll definitely check it out. Sometimes I’m surprised and delighted that I really relate to it. I’m not really a consumer of popular culture, but for that reason, if I find something I love, I really love it. As soon as we hang up, I’m going to check out Silk Sonic.”